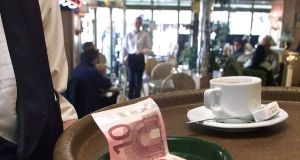 The CSO’s new measure indicates that government debt peaked at 160 per cent in 2012. Photograph: AP

Ireland’s national debt stood at €198 billion at the end of last year, up 1 per cent from the previous year, figures from the Central Bank show.

While debt as a proportion of gross domestic product (GDP) has been falling, overall debt has fluctuated in tandem with Government borrowing.

As a percentage of GDP, Ireland’s debt was about 73 per cent last year.

However, this jumps to 106 per cent when expressed in modified gross national income (GNI)terms, which the Central Statistics Office (CSO) believes is a better indicator of true activity.

When applied retrospectively, the CSO’s new measure indicates that government debt peaked at 160 per cent in 2012 compared to a reported debt-to-GDP ratio of 120 per cent, suggesting the crash burned a comparatively bigger hole in the State’s finances than previously thought.

1 Farmer seeks to challenge €3.6bn Intel plan in High Court
2 Fallon & Byrne founders McHugh and Byrne exit group
3 Cosgrave should give his speech to Web Summit’s partners in Saudi Arabia
4 Council tells Johnny Ronan firm to keep the noise down at D4 Embassy venue
5 Who are Ireland’s 17 billionaires?
6 RTÉ’s multiple lobbying meetings with politicians
7 Paschal Donohoe's biggest regret: 'Not managing the National Children’s Hospital better'
8 Election proposals may make the housing crisis worse
9 European shares up as investors bet on economic uplift in 2020
10 Are there annual limits on inheritances or gifts to a child?
Real news has value SUBSCRIBE