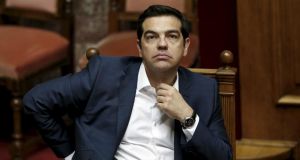 A defiant Alexis Tsipras has told the Greek parliament that proposals presented to Greece by international lenders are “unrealistic” and represent “a bad moment for Europe”.

As European markets fell sharply yesterday in response to Greece’s decision to postpone a €300 million repayment to the IMF due yesterday, the Greek prime minister warned international lenders not to impose “humiliating” terms on Greece.

Mr Tsipras added that his own proposals were the only “realistic option”.

“The strangulation of a country is a matter of moral order, which conflicts with the founding principles of Europe, ” he told parliament Friday evening.

Earlier in the day, Mr Tsipras held a 15-minute phone conversation with Russian president Vladimir Putin, who is locked in a diplomatic standoff with the European Union over Russia’s annexation of Crimea and continuing tensions in Ukraine.

The two leaders discussed energy issues, according to a Greek government spokesman, with Mr Tsipras confirming his attendance at an economic forum in St Petersburg on June 18th, which coincides with the next scheduled eurogroup in Luxembourg.

A paper circulated ahead of Mr Tsipras’s address to the parliament and seen by The Irish Times said that proposals presented to Greece by its international lenders at a late-night meeting in Brussels on Wednesday contained “extreme positions that cannot be accepted by the Greek government”.

“The institutions show little sign of compromise,” the paper states, reiterating that the government envisages a restructuring of Greek debt “in order to put an end to the vicious circle of the past five years”.

More than four months after a Syriza-led government swept to power in Athens, Greece is facing a cash-crunch as negotiations with EU and IMF lenders about a fresh reform package founder.

Rating agency Fitch said yesterday that Greece’s decision to postpone June 5th payment, and instead bundle its four payments due to the IMF this month in one instalment at the end of June, did not constitute a default.

But while the move did not affect Greek’s CCC sovereign rating, Fitch said the decision highlights “the extreme pressure on government funding”.

Nonetheless, markets fell sharply on the news, with two- year Greek yields climbing by nearly three percentage points to more than 25 per cent.

The Athens stock market led falls across European bourses, sliding by 5 per cent, with the main Greek banks down almost 10 per cent.

Amid signs that a general election could become increasingly likely in Greece, a hardline senior government minister raised the prospect to end the impasse.

“The lenders want to impose hard measures. If they do not back down from this package of blackmail, the government . . . will have to seek alternative solutions, elections,” the deputy social security minister, Dimitris Stratoulis, told Greek television.