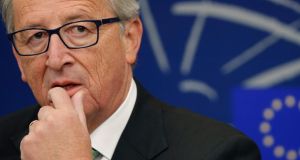 European Commission president Jean-Claude Juncker: he made it very clear in July he is dedicated to step up efforts to combat tax evasion and tax fraud. Photograph: Reuters/Christian Hartmann

Last year was the year the world discovered there is no whiskey in a double Irish and no cheese in a Dutch sandwich.

Discussions about fair taxation and tax avoidance featured prominently on last year’s menu. What we have seen is a welcome shift in public perception and political positions in favour of taking steps to battle tax fraud and tax evasion, to ensure that all companies pay their fair share of tax. And this shift has also enabled us to take action: 2015 will be a crucial year to use this momentum to achieve concrete results.

We have a situation today where some companies are engaging in aggressive tax planning, made possible by a lack of fiscal harmonisation in the EU and loopholes in national taxation systems.

They do this with the help of consultancies – and sometimes even of national tax authorities. If this is done to favour only selected companies, it damages our single market and hurts European citizens directly. Especially in challenging economic times, with many EU citizens having had to tighten their belts, it is even more important that large companies pay their fair share of tax. Jean-Claude Juncker made very clear in his political guidelines presented last July in front of the European Parliament that he is dedicated to step up efforts to combat tax evasion and tax fraud.

It is also only a few weeks ago that the two of us were on a coach with all of our fellow commissioners on our way to take an oath of office before the European Court of Justice in Luxembourg. Incidentally, the coach – rented from the Belgian football team Club Brugge – read “No sweat, no glory”, which was fitting for the occasion (no football club endorsements intended).

Since June last year, the Commission has been investigating so-called “tax rulings” in several EU countries. Our services are working on these ongoing cases as a matter of urgency, and we are committed to presenting the first results of these investigations by the second quarter of this year.

For the record, tax rulings are not a distortive instrument as such. Almost all EU countries use this fiscal instrument to provide companies with legal certainty for their tax matters. However, there are allegations that the tax ruling instrument may have been misused to the benefit of big corporations.

There is a difference between a tax incentive for all, and preferential treatment for some. The latter may well amount to unwarranted state aid. This is of concern both to European citizens and to the European Commission, which is looking carefully into the matter.

The information made available by the impressive journalistic work behind “Luxleaks” has provided some additional insights, and will be carefully processed. But we need to have the full picture of what is going on. We need to take a structured approach.

Therefore, in addition to our own ongoing investigations, in December we asked all EU countries to detail their tax ruling practices. This will help to establish a coherent approach and get a better picture of the extent of the respective practices and possible problems.

In the worst case scenario, unfair tax competition could create a race to the bottom, in which countries feel compelled to give hand-outs to multinationals in the form of tax breaks. The losers are the taxpayers who foot the bill, the small businesses that cannot compete, and national governments which lose tax revenue needed to build roads, power grids and schools. The winners are the big businesses that play European countries off against each other.

This is not an issue limited to a small number of EU countries – it is a European problem, needing a European solution. That’s why the Commission is planning to present new legislation in the area of taxation. In spring this year, we will table a proposal on the automatic exchange of information on cross-border tax rulings.

At last November’s G20 summit in Brisbane, it was upon president Juncker’s initiative that world leaders committed to transparency on tax rulings. We will continue to drive forward this agenda internationally within the OECD, where we are working on modernising international tax rules. This will be finalised by the end of this year.

We now have a great opportunity to make tax competition within the EU’s single market fairer and more transparent. These initiatives are only the start of the establishment of a fairer tax system in Europe on the basis of which profits are taxed where value is created. At the same time, we will continue to enforce our state aid rules where we believe that selective tax advantages distort fair competition. Our political pledge is simple: all companies have to contribute their fair share. In 2015 we will make good on this pledge. Margrethe Vestager and Pierre Moscovici are, respectively, commissioners for competition and for economic and financial affairs, taxation and customs in the European Commission