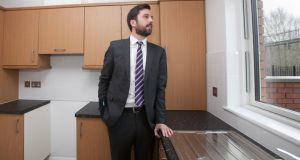 Eurostat said it was correct to consider approved housing bodies as statutory bodies because, among other reasons, the rents they charge are too low and not related to market rents and have no bearing on investment decisions.

The agency’s final determination on the issue, set out in a letter to the Central Statistics Office released this week, adds another reason why the housing bodies should be counted towards State debt.

The finding may complicate any Government efforts to classify the groups as private bodies again in order to free up the Government’s financial capacity to provide critical social housing.

The reclassification of 14 of the country’s largest housing bodies will affect the Government’s capacity to spend on housing as their finances will be considered State-owned for EU borrowing and debt purposes.

Minister for Housing Eoghan Murphy has said that Eurostat’s ruling would not impede the delivery of social housing, but voluntary housing groups have warned that it could significantly reduce the number of new social housing units and affect Government’s housing plans given its reliance on the bodies to meet targets.

Luca Ascoli, acting director of Eurostat, told the CSO in the letter than the agency considers housing bodies to have “a non-market nature” due to their principal aims and other existing provisions.

“Moreover, the prices charged for renting cannot be seen as being economically significant, due to the fact, among others, that they do not seem to respond to change in the market or to economic signals and have little influence on how much the producer is prepared to supply and on the quantities demanded,” he said.

Sinn Féin housing spokesman Eoin Ó Broin said this creates a “much bigger problem than people think” and that meeting the three thresholds set out by Eurostat to push the housing groups off the Government’s balance sheet again was not just a matter of “fiddling around to twist financial arrangements”.

“That is quite profound and I haven’t heard anyone say how you would deal with that in a way that maintains the not-for-profit ethos of the sector,” he said.

1 Why are markets booming when a crash is on the way?
2 Could your old car be giving away all your secrets to its new owner?
3 Permission sought for €150m film and media campus in Wicklow
4 Dunnes Stores trials online ordering from Cornelscourt outlet
5 Covid-19: Publicans and restaurateurs row over calls for VAT cuts
6 Ryanair passenger traffic slumps 97% as shutdown restricts travel
7 AIB U-turn on mortgage block for those on Covid wage subsidy
8 Vodafone to speed up 5G rollout using new technology
9 Staff at Bewley’s cafe on Grafton Street are made redundant
10 Up to 400 jobs saved in Cavan as MML takes stake in CG Power Systems
Real news has value SUBSCRIBE