Departure comes shortly before the next bailout review 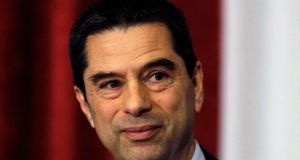 Portugal’s finance minister Vitor Gaspar, the architect of the country’s €78 billion EU/IMF bailout plan, has resigned and will be replaced by the country’s treasury secretary, the president’s office said yesterday.

Mr Gaspar’s departure marks the biggest political casualty from the country’s debt crisis since the previous Socialist government collapsed in 2011 after it was forced to request the bailout.

The centre-right Social Democrats have governed since then in a coalition with the right’s CDS.

Mr Gaspar’s departure comes shortly before the next review of the country’s bailout by the EU and IMF, to start on July 15th.

Mr Gaspar, who has been widely blamed by the Portuguese for the deep austerity that has ravaged the country under the bailout, said in a resignation letter that he quit due to the growing erosion of public support for the adjustment plan.

“The risks and challenges in coming times are enormous,” he said in the letter addressed to prime minister Pedro Passos Coelho. “They demand cohesion in government. It is my firm conviction that my departure will contribute to reinforce your leadership and the cohesion of the government.”