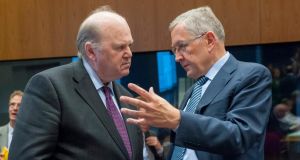 Minister for Finance Michael Noonan with Klaus Regling, from Germany, Managing Director of the European Stability Mechanism (ESM) prior to the eurogroup finance ministers meeting in Luxembourg. Photograph: Nicolas Bouvy/EPA

Eurogroup president Jeroen Dijsselbloem has played down the possibility that Ireland may be granted debt relief for Bank of Ireland and AIB by the European Stability Mechanism fund, pointing out that its €60 billion cap could limit its capacity for retrospective deployment.

“Technically speaking it would be possible. Politically it would be difficult,” Mr Dijsselbloem said following an agm of the ESM’s board of governors in Luxembourg.

He said the next step would be to gain parliamentary approval for the mechanism, which is required by a number of member states. “Then we’ll see whether there are any realistic requests from the member states to use the instrument.”

Minister for Finance Michael Noonan, who attended the ESM meeting ahead of yesterday’s eurogroup, said he had not raised the issue of bank direct recapitalisation for Ireland, pointing out that the scheduled meeting had been a formal agm.

The ESM’s direct bank recapitalisation instrument will come into effect in November when the European Central Bank takes over supervision of euro zone banks. This will also coincide with the results of the European-wide stress tests, with the ESM fund possibly being used to directly recapitalise troubled banks.

“Most countries see direct bank recapitalisation as an emergency measure to be used if a bank is in trouble. There is little political support for using the fund to help Ireland, particularly as Ireland is now funding itself at less than 3 per cent on the market.”

Meanwhile, Mr Dijsselbloem expressed confidence in the ability of the Government to end the country’s excessive deficit next year. Ministers were updated yesterday on Ireland’s first post-programme review mission by the European Commission, which is due to be published on Monday.

It is expected the commission will echo this week’s call by the IMF for a €2 billion adjustment in this year’s budget.

“We are glad to see that the impeccable track record of Ireland is maintained, and are confident that the Irish Government is on track to end its excessive deficit next year as planned,” he said yesterday evening following the meeting which was also attended by IMF managing director Christine Lagarde.

Despite calls by Brussels and the IMF for Ireland to commit to €2 billion in cuts next year, Mr Noonan said yesterday the scale of cuts in the budget would be below this level. “I no longer believe it will take €2 billion.”