EU tax strategy: what has Ireland to fear?

Analysis: At issue is not Ireland’s tax rate but the amount of money exposed to this rate 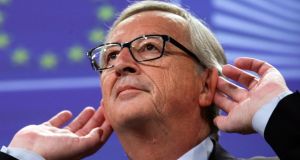 The Luxleaks saga has drawn the EU Commission and its president Jean-Claude Juncker into promising a new crackdown on tax evasion.

Juncker’s credibility in fronting this is obviously in question, given his previous position as long-time prime minister of Luxembourg. But it plays into a picture which carries, as Suzanne Lynch reported this morning, some dangers for Ireland.

The EU Commission is promising to take more central control of corporate tax policy, policing agreements between countries and firms and progressing an agreement on a new common tax base.

Ireland’s politicians will continue with the mantra that the 12.5 per cent tax rate is not under threat, but they know that this is not the point. At issue here is not the tax rate, but rather the amount of money that is exposed to this rate – and where this tax is collected.

It is not yet crystal clear where all this is going. You would sense, in fact, that part of yesterday’s agenda was the EU Commission trying to reassert its control over the setting of tax rules in Europe. Over the past few years the OECD has stepped into this territory, pioneering a study on the tax base for multinationals globally and getting significant political support for this.

This OECD BEPS ( base erosion and profits sharing) study is seen as the template for reform. However the EU Commissions has long pursued its own approach to creating a common consolidated tax base (CCTB) across the EU. Trying to marry these two acronyms would be a nightmare that would take years – someone has to be in charge.

There seem to be two specific dangers for Ireland. One is the closing of specific tax rules which multinationals here use to their advantage. Many US companies currently funnel money earned elsewhere in Europe or further afield through Ireland and on to a variety of tax havens.

The double Irish – now being gradually closed off – is only a part of this. There will be a shake down here as rules are changed and countries scramble for advantage. Ireland’s attempt to get clearance for a new “knowledge box” to encourage the exploitation of research and development here is one part of this.

However there is a wider context, too. The international corporate tax system is not set up for the digital world. Ireland has benefited from rules which allow tax to be paid where companies are managed, rather than where sales actually take place. As Brian Keegan, director of tax at Chartered Accountants Ireland points out: “The notion that companies are not just taxed where they operate, but where they are managed and controlled has been in the tax systems of the Western world for over 100 years. It’s an idea, conceived in the age of empires, that taxes should be paid in the capital rather than in the colonies. You could call it fiscal imperialism.”

This suits Ireland, as big multinationals can operate here and argue that sales made elsewhere in Europe generate income that should be taxed here, rather than where the sales are actually made. The danger in what is going on now is some kind of global agreement that companies should be obliged to pay more tax where the product is actually sold. This would damage Ireland’s tax advantage for at least some multinationals.

Given the international debate about Apple, Google, and now Luxleaks, change is on the way for sure. The shape this change takes is vital for Ireland.

Dublin business features in leak of US treasury documents 18:15
Rolls-Royce plans to raise up to £2.5bn as Covid-19 bites 16:01
Norway extends loan guarantees for Norwegian Air 15:56
US judge halts Trump administration’s order to remove WeChat from app stores 15:53
A look at Elon Musk’s track record ahead of Tesla’s ‘battery day’ 15:05

1 Chris Johns: We’re in for a triple whammy of Covid, Brexit and the US elections
2 Dublin business features in leak of US treasury documents
3 A look at Elon Musk’s track record ahead of Tesla’s ‘battery day’
4 Facebook may pull social media platforms from Europe
5 Aldi empire wracked by family feud
6 Rolls-Royce plans to raise up to £2.5bn as Covid-19 bites
7 Four-day week is a campaign worth watching
8 Dublin-based Fenergo considers $1.5bn listing
9 Norway extends loan guarantees for Norwegian Air
10 NatWest considers closing Ulster Bank in the Republic
Real news has value SUBSCRIBE