Cost of doing business, Ryanair’s strike, and the public finances 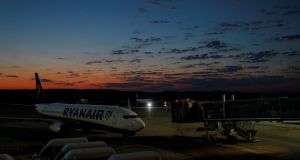 Ryanair will cancel up to 30 flights from the Republic to the UK tomorrow, hitting about 5,000 passengers, as a result of its the first planned strike by its Irish-based pilots.

The cost of doing business will be an ongoing theme today. First up is a report, compiled by the Oireachtas Business Committee, which claims Irish businesses have begun looking outside the State for more affordable insurance premiums as the spiralling price of cover becomes an increasingly existential threat.

Later this morning the Dáil Public Accounts Committee will be highly critical of the revaluation of commercial rates businesses have to pay to local authorities. It is understood the powerful cross-party Dáil committee will take issue with the length of time it has taken for many local authorities to engage in a revaluation programme, with some not revaluing for more than over a decade.

The State’s corporate watchdog is concerned that several serious matters suggest a “fundamental malaise” within Independent News & Media and a “culture of deference” to its major shareholder, Denis O’Brien, the president of the High Court has heard.

Ryanair will cancel up to 30 flights from the Republic to the UK tomorrow, hitting about 5,000 passengers, as a result of its the first planned strike by its Irish-based pilots.

Minister for Finance Paschal Donohoe has committed to lowering the tax burden for middle-income earners but on a “gradual” basis. He said doing too much too quickly would not be appropriate at this stage of the budgetary cycle and ran the risk of overheating the economy.

In his column, Cliff Taylor says the party’s nearly over when it comes to cheap debt and argues the Government now needs to to run a budget surplus and sell some of its remaining bank shares.

In commercial property, Jack Fagan reports on how Eir is in advanced negotiations to sublet a substantial part of its Dublin headquarters at Heuston South Quarter (HSQ) to AIB. He als report on Dublin’s thriving retail investment market has received another shot in the arm with the sale of 18/19 College Green in the city centre for €4.65 million – more than €500,000 above the guide price.

FenuHealth, an equine feed business founded by entrepreneurs Kate (18) and Annie (16) Madden from Meath, will establish a UK distribution centre to deal with the potential threat of Brexit in a key export market. Kate Madden told The Irish Times the company had discussions with former UK foreign secretary Boris Johnson surrounding the impact of Brexit, and how they would go about setting up the centre.

1 Basic income for all: Has the Covid crisis given us a new economic model?
2 ‘I don’t need to do any of this. . .I don’t actually need to work.’
3 Promontoria barred from pursuing doctor over Ulster Bank loan
4 How long can Government afford to keep State pension age at 66?
5 Pandemic brings a halt to Zara-owner’s Irish expansion
6 Unilever’s Dutch and British arms merge after 90 years ahead of Brexit
7 AIB revives €1bn-plus problem mortgages sale
8 Direct sea routes to Europe offer certainty in choppy Brexit waters
9 Only way is up for Stripe as valuation skyrockets
10 ‘Make plans but don’t hold on to them too seriously’
Real news has value SUBSCRIBE