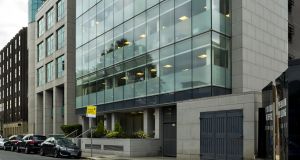 German asset manager KanAM Grund Group is understood to have paid about €35 million in an off-market transaction for One Upper Hatch Street in Dublin city centre.

The office investment, which is occupied predominantly by “Big Four” accountancy firm, Deloitte, will show a net initial yield of just over 4 per cent.

In November 2018, the Frankfurt-headquartered company acted on behalf of South Korean institutions, Hana Financial Investment and JR AMC in their €106 million purchase of No 2 Dublin Landings in Dublin’s north docklands.

Last October, KanAm Grund made its first investment here in its own right, with the off-market acquisition for over €20 million of the Wythe Building on Cuffe Street in Dublin city centre. While the company is still at a relatively early point in terms of its overall investment in the Irish market, it is a major player internationally with more than €8.25 billion in assets under management.

One Upper Hatch Street is a grade A, eight-storey, over-basement office building. Located on one of the most sought-after streets within Dublin’s core central business district, the property was redeveloped and extended to its current size of 2,800sq m (30,139sq ft) in 2006 by its previous owners, a Scandinavian private family office and an Irish private investor. The property is fully-let to Deloitte and US-based tax adviser, H&R Block. The two firms occupy seven floors and one floor respectively.

Kenneth Rouse, managing director and head of capital markets BNP Paribas Real Estate, acted for the vendors of One Upper Hatch Street, while Kevin McMahon, associate director at Savills acted on behalf of KanAm Grund. While both declined to comment on the price paid for the property, they welcomed the completion of the transaction.

Mr McMahon said: “We are delighted to have represented KanAm Grund in this off-market acquisition. One Hatch Street represents an excellent, long-income investment asset with a very attractive lot size, situated in a prime location. We look forward to continuing our relationship with KanAm Grund and supporting them on any further investments in the Irish market.”

1 Chris Johns: Economies may enjoy ‘roaring twenties’ if ministers learn lessons
2 Wet pub openings fuelled rise in Irish Covid infection rates – report
3 Profits jump threefold at LinkedIn’s Irish unit to $294.2m
4 Admission of mistake in Oxford vaccine dose raises doubts over reliability
5 Only way is up for Stripe as valuation skyrockets
6 There was no vaccine for Anglo: Why the last crisis was different
7 ‘I don’t need to do any of this. . .I don’t actually need to work.’
8 Basic income for all: Has the Covid crisis given us a new economic model?
9 ‘Make plans but don’t hold on to them too seriously’
10 How long can Government afford to keep State pension age at 66?
Real news has value SUBSCRIBE