With political changes ahead, Xi Jinping will want to keep the economy steady 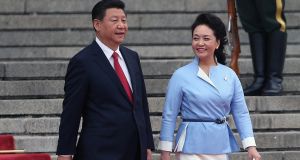 Politics will play a major role in China’s economic future this year when president Xi Jinping will name the new Standing Committee of the Politburo. 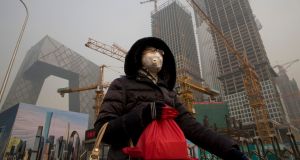 Analysts say it’s like peering through a fog trying to assess the prospects for the Chinese economy in 2017. Photograph: AP/Ng Han Guan

Peering through billowing clouds of smog into what lies in store for China’s economy in 2017, analysts are waiting to see if measures to support stability ahead of a key Communist Party meeting this year can outweigh negative forces that signal tough times for the world’s second-biggest economy.

Underlying more bullish sentiment are data showing the economy has come out of four years of factory deflation, domestic consumption remains fairly buoyant and, despite almost inevitable political strains with the US, president-elect Donald Trump’s promises to crank up fiscal and infrastructure spending could give Chinese exports a boost after years of contraction.

China’s central bank has stepped up its efforts to support the yuan currency amid concerns over capital outflows and to deter speculation. Beijing is keen to keep the currency above the 7-yuan-per-dollar level ahead of Trump’s inauguration on January 20th.

In the bears’ corner, we have a debt crisis, a property bubble poised to burst, turmoil on the financial markets, sluggish economic reform, a depreciating yuan and slim prospects of recovery in the export business that drove China’s remarkable rise in the first decade of the century.

Last month, China’s annual Central Economic Work Conference was held in Beijing and on the agenda were plans to cut excess industrial capacity, encourage a more open economy and bring in foreign investment.

It may have been the buzzword of the past five years, but amid slowing growth, very few people are talking about the “New Normal” in Beijing these days. Instead the focus is more on managing risk.

“Xi’s answers seem to be more Leninism and more markets. Yet this is a highly problematic combination. The reason Deng Xiaoping promoted devolution of decision-making is that China is too vast for anything else. Today, the complexity of the economy makes centralised political control even more unworkable,” Wolf wrote.

Politics will certainly play a major role in China’s economic future next year. Xi will name the new Standing Committee of the Politburo, the seven men who run China, and he will want to fill it with his allies and for this to happen, stability is key. This means keeping the economy ticking over while debt soars.

Rodney Jones, Beijing-based principal of Wigram Capital Advisors, who was a partner at Soros Fund Management during the 1990s, believes the Chinese government is trying something entirely new and no one knows where things are headed.

“We are watching something historic, we just don’t understand it. We know it’s historic and we don’t know how. There are no precedents for this. It’s like financial Star Trek, boldly going where no one has gone before, we are stuck on that journey,” Jones told The Irish Times in an interview.

“So the problems that are building, they are ruling out the necessary adjustments. This is the most leveraged financial system we have seen in financial history,” said Jones.

“We are not going to see a crash because the state controls everything. We have no idea where the economy is going. There is no visibility,” said Jones. “We are like the Israelites wandering through the desert for 40 years. The government can keep injecting cash until they run out of reserves or until they create inflation.”

The rise in the commodities market is driven by speculation that reforms are helping to reduce oversupply of raw materials, against a backdrop of rising demand. Returns in stocks and real estate remain sluggish, driving cash into commodities.

“The equity rally was called the reform rally when it was a bubble. We have also had the supply side commodity rally, which has nothing to do with supply side. They attach these narratives,” he said.

He expects about 6.5 per cent growth next year, which is generally seen as about the lowest level the Communist Party can allow, and remarks signalling that this is the likely growth rate have appeared in official publications.

“This is growth, but it’s growth using massive amounts of debt,” said Jones.

Organisations such as the Asian Development Bank are expecting full-year growth in China to hit 6.6 per cent this year, driven by strong domestic consumption, solid wage growth, urban job creation, and public infrastructure investment. The ADB forecasts this slipping back to 6.4 per cent growth next year.

HSBC is also cautiously optimistic. “The easing of deflationary pressures is set to continue, leading to a modest recovery in private sector investment,” it said in a research note. “The US and China will avoid a trade war, but we expect bilateral negotiations on market access to continue. The property market slowdown impact is manageable and can be offset by robust infrastructure investment.”

In an editorial run by the official Xinhua news agency, commentator Zhang Zhongkai said the bearish fears were overdone, although the author did not go into detail on debt fears, for example.

“Of course, market worries about a Chinese economic slump are not groundless. Burdened with debt overhangs, excess capacity, a high-leveraged property market, zombie state-owned enterprises and struggling banks, China is prone to being portrayed as the next victim of a crisis,” Zhang wrote.

“While China’s challenges should not be taken lightly, it continues to make encouraging headway on structural adjustments in its real economy, evident from consumption contributing to more than two-thirds of overall growth, and rapid growth in the services sector,” said Zhang.

1 Fianna Fáil may have just pressed the pause button on the property market
2 UK to prioritise EU trade deal over one with United States
3 Who are Ireland’s 17 billionaires?
4 Saudi prince’s WhatsApp account ‘directly involved’ in Bezos hack
5 Are there annual limits on inheritances or gifts to a child?
6 My father in a nursing home wants to gift me his house
7 European investor acquires Harcourt Road offices for €55m
8 Corporate tax change is inevitable, says Donohoe
9 New blow for Ted Baker as accounting scandal doubles in size
10 Dublin Airport contributes €10bn to economy - study
Real news has value SUBSCRIBE