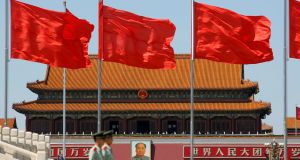 China has slammed a decision by the European Parliament refusing to grant it the market economy status it considers its right under World Trade Organisation rules, describing the lawmakers’ decision as “not constructive”.

Voting against the resolution last Thursday, EU parliamentarians said China must reform its economy and meet fully meet criteria that describe a market economy, including a requirement to cut back the influence of the state on business. This could prove an issue in China, where the vast bulk of firms are either wholly owned or majority held by the state, and pledges to liberalise the state sector have been slow in coming.

While the vote was a non-binding resolution, the European Commission needs parliament’s approval if it proposes granting China market economy status in December, when a decision is due.

“We don’t want people to continue to look at China through coloured glasses,” said Mr Wang.

“Whether the EU grants market economy status to China or not, it needs to deliver on its WTO obligations rather than dodge them,” Wang said.

If China is granted market-economy status it would make it more difficult to impose anti-dumping duties on Chinese goods sold cheap into Europe, as it would change how fair price is determined.

Those in favour of granting the status to China say European consumers will benefit from cheaper Chinese imports, but lobbyists for European manufacturing companies reckons it could lead to up to 3.5 million EU job losses if status is granted.

The resolution was carried by a large majority, with 546 members of the 751-strong European Parliament voting in favour of requiring China to meet all five EU criteria to be defined as a market economy before MES was accorded.

The issue is hugely political as China and the EU are currently at odds over what Europeans say is the dumping of Chinese steel in Europe.

Steel is expensive in the EU because of high energy costs and environmental taxes, whereas China, which makes half the world’s steel and has an overcapacity of about 400 million tonnes, has more than twice the EU’s total output.

Europe has lost around 85,000 steel jobs since 2008, over 20 per cent of the sector’s workforce, as steel prices collapsed to decade lows due to overcapacity, flagging demand and a flood of cheap imports, most of them from China.

The parliament’s resolution referred to China’s overcapacity in steel and its cheap exports. The commission is expected to come up with a proposal on China’s trade status by July. The options open to the bloc are to either kick the issue into touch, grant China market economy status, or accord it MES with some caveats.