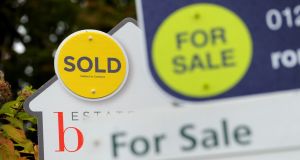 Rightmove believes the looming Brexit deadline is spurring some home-buyers into going for the certainty of doing a deal. Photograph: Andrew Matthews/PA Wire

August, normally a quiet month for Britain’s property market, has seen a surge in sales, possibly due to buyers seeking to conclude transactions before the country leaves the EU on October 31st, property website Rightmove said on Monday.

Rightmove said sales in the August period, which cover the four weeks to August 10th, were 6.1 per cent higher than a year earlier and their strongest for the month since 2015, bucking a generally sluggish trend since June 2016’s referendum on leaving the EU.

“While the end of October Brexit outcome remains uncertain, more buyers are now going for the certainty of doing a deal, with some having perhaps hesitated earlier in the year,” said Rightmove director Miles Shipside.

New prime minister Boris Johnson has promised to take Britain out of the EU by October 31st, even if that means leaving without a transition deal - something most economists think will cause major disruption to businesses and overseas trade.

However, British consumers have largely shrugged off Brexit worries so far, bolstered by a strong labour market and the fastest rises in wages in 11 years, in contrast to businesses, which have held back from making major investments.

House price inflation has slowed since June 2016, according to official figures. But this has largely been driven by price falls in London and surrounding areas, which have been most affected by higher property taxes on expensive housing and fears of post-Brexit job losses in the financial services sector.

Rightmove said asking prices on its website were down 1 per cent on the previous month – a smaller fall than normal for August, when many buyers are away on holiday – while prices were 1.2 per cent higher than a year earlier. Sales rose fastest in northeast and eastern England, and the biggest fall in asking prices was in southeast England excluding London.

Rightmove based its data on more than 130,000 prices collected between July 7th and August 10th from its website, which it says advertises 90 per cent of residential property on sale in Britain. – Reuters

Cities are too resilient to be killed by Covid 11:53
Google to lease extra 70,000 sq ft of London office space 10:39
IAIM saw lobbying as key to CEO role taken by D'Arcy 10:01
Hibernia Reit seeks occupier for final place at the Windmill Quarter 09:54
Flexible foothold in Dublin’s south docklands at rent of €52.50 per sq ft 09:53