First clear sign British households have been unsettled by vote 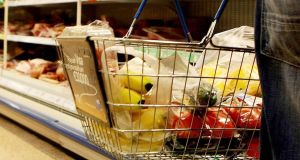 British consumer morale suffered its biggest drop in more than five years after last month’s decision by voters to leave the European Union, and surveys of recruitment firms and retailers also signalled a slowdown ahead.

In a special post-referendum survey, market research company GfK said consumer confidence fell to -9 in the aftermath of the June 23rd vote from -1 in its previous regular monthly survey, marking the steepest decline since January 2011.

The last time the decline was steeper was in December 1994. The index is now at its lowest level since December 2013.

The GfK survey is one of the first clear signs that British households - a key driver of the economy - have been unsettled by the June 23rd vote to quit the EU, which sparked political chaos and sent sterling to a 31-year low against the dollar.

Bolstering a growing view that the economy is likely to slow markedly in the second half of this year, accountants BDO said retail sales spiralled lower through the month as the referendum campaign reached its climax.

A survey from the Recruitment and Employment Confederation showed the number of permanent staff hired via recruitment firms fell for the first time since December 2012 - around the last time Britain’s economy flirted with recession.

Permanent salary growth slowed to its lowest level since September 2013, according to the REC survey, conducted by data company Markit in the week before the referendum result.

“The best thing for business right now is clear and calm leadership and as much clarity as possible on what the post-EU future will look like,” said REC chief executive Kevin Green.

The surveys will be read with interest by policymakers at the Bank of England, who will hold their first meeting to set interest rates over the coming days.

BoE Governor Mark Carney has said the economy faces a material slowdown after the referendum result, and the BoE took steps on Tuesday to encourage bank lending

The BoE may decide to cut interest rates to a new low next week, although most economists polled by Reuters expect it to hold off until it releases new economic forecasts in August.

GfK reported that people who wanted to stay in the EU - 48 percent of voters - were much more pessimistic than the 52 per cent who voted to leave.

“Our analysis suggests that in the immediate aftermath of the referendum, sectors like travel, fashion and lifestyle, home, living, DIY and grocery are particularly vulnerable to consumers cutting back their discretionary spending,” said Joe Staton, head of market dynamics at GfK.