Cantillon: Ireland will hope the months ahead will see a change in the downbeat mood around the OECD’s efforts on a deal 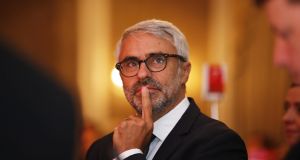 Pascal Saint-Amans: whether the politically-canny OECD tax head can pull off an exercise in herding cats remains to be seen. Photograph: Nick Bradshaw

The OECD put on a good show in its latest update on efforts to get global agreement on a plan to reform the way big multinational companies pay tax. But while a lot of the detail of this is mind-numbingly complex, the real issues are political.

The US has politically drawn back from the OECD process, objecting to the way it will affect some big American players. Unless this changes after November’s election there will be no agreement next year.

Observers say that the deadline of reaching agreement in the talks by next June among the 137 participating countries was carefully chosen. It is an attempt to allow enough time for the US to get back on board. And to keep the EU side from growing so impatient that it presses ahead with its own corporate tax reform plan.

Much may hang on the outcome of the US presidential election, though Joe Biden is also making some aggressive noises in relation to safeguarding the US interests in the tax arena.

The G20 will probably nod through the proposals at a meeting this week. But for the key calls to be made, political engagement is needed. Whether the politically-canny OECD tax head Pascal Saint-Amans can pull off this exercise in herding cats remains to be seen,

The calculation for Ireland is that while this process brings dangers, we have already gained big-time from the first phase of OECD reform and may still end up ahead. However if the talks fail two key dangers appear.

One is of an acceleration of the existing tensions between the US and EU on the digital sales tax issue and the outbreak of a trade war, with Ireland, as a small exporting country with a big US multinational presence, stuck right in the middle.

The second is the revival of long-standing EU plans for corporate tax reform, the most dangerous of which would involve taxes being collected on a consolidated basis at EU level.

Ireland will hope that the downbeat mood music surrounding the OECD process changes in the months ahead. Progress is needed by early next year or the prospect of collapse will loom large.