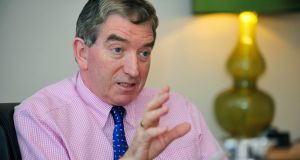 UCD Smurfit School chairman Niall FitzGerald has called on the Government to implement an ambitious strategic plan in the wake of Britain’s decision to leave the European Union, and also seize the opportunity to position Ireland as a global hub for research.

Addressing an executive lunch at law firm A&L Goodbody, Mr FitzGerald said the special relationship between Ireland the UK should be preserved, although he acknowledged Brexit would make it more challenging.

“We need a really strategic plan for Ireland. A plan that is clear about what has changed, how this enhances our attractiveness and what our global FDI proposition delivers,” he said. “We now have the unique attraction as the naturally English-speaking, pro-business, easily accessible, euro-denominated EU member state with a truly open and diverse society, and highly-educated young talent.”

However, he stressed that the strategy should not centre on “fancy tax breaks”, saying this was not sustainable if we wanted to build industrial infrastructure. Instead, he suggested, the Government should look at the country’s core competencies, including research, talent and business clusters.

He also called on the Government to implement the Cassells report on third-level funding, to boost universities and help them move up the rankings and attract the world’s best researchers.

At a separate event to launch UCD’s €65 million investment programme for its business schools, Mr FitzGerald said Brexit could provide an opportunity for Irish institutes.

“Of immediate worry for the UK and a definite opportunity for Ireland are signs that critical funding for education and research are drying up. The sector that is so vital to the UK’s future wellbeing is being cut off from €1 billion of EU funding for its universities and its researchers across Britain and Northern Ireland, ” he said.

“Already, some of the world’s leading researchers are seeking a new base within the EU facing loss of their lead role on key research projects or indeed outright exclusion from pan-European research consortia.”

He proposed partnerships with UK universities to help stave off a “brain drain” to other countries in the EU.

“We need to find ways both to work with the UK but also to compete on our own account,” he said. The Cassells report would be the first step in this process, he said, adding that it was not the time to “play politics”.