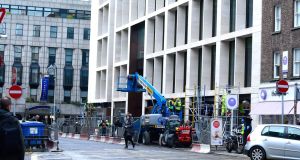 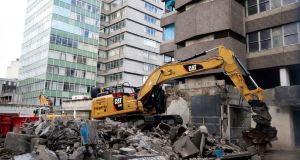 For enthusiasts of construction hoarding, a stroll around Dublin’s city must be a delight. Perhaps less so than before Christmas, but there’s no shortage of developers promising vast swathes of square footage around the capital.

While the completion dates on the developments vary, projected occupancy rates are almost uniform following a year that saw the highest level of activity ever recorded in Dublin’s office space market.

So far, so positive. But, some of those with skin in the game suggest that the office space party is beginning to come to an end. Denis O’Brien, himself a commercial property investor, told The Irish Times in Davos that Dublin is in the midst of an office-market bubble and there “won’t be enough” people to put in them.

He’s not the first to suggest that Dublin’s office offering is on track to outstrip demand. In September, Anne Breen of Aberdeen Standard Investments, said that if construction continues at current levels, the city will have a glut of offices.

So is it the case that we’re returning to the trends of the recent past or are the voices of the naysayers simply being given too much attention?

Certainly, there’s a lot of activity. As Knight Frank noted in its review of the market in 2017, 334,450 sq m (3.6 million sq ft) was let as the market expanded for the fifth consecutive year. More interestingly, they say the top 10 deals last year were higher than the combined total of deals between 2009 and 2016.

Take up in the city centre was particularly strong, accounting for 61 per cent. But perhaps that portion of the market is in line for a slowdown. This week, The Irish Times learned that the famously tight-lipped Google is taking just shy of 4,924 sq m (53,000 sq ft) in Sandyford, a move that marks a shift in its office accommodation strategy. The company had, until now, mostly concentrated its office space needs around the Dublin 4 area of the city – so much so that the area has earned the moniker Silicon Docks. Google does have a presence in East Point, and had previously signed a small agreement in Sandyford, but this lease mirrors the size of the recent move into the Velasco building.

Then of course there’s Microsoft. It has expanded its Dublin presence but far away from the bright lights of Grafton Street, instead bringing its workers closer to the racing action in a brand new building in Leopardstown.

They’re just two players in the market, and not necessarily indicative of an overall shift. LinkedIn, for example, only last year moved into its new offices on Wilton Place. But if these companies are looking to move lower value roles to lower cost areas, the suburbs could be in line for a boost.

Last year was one that saw demand for office space driven by the technology, media and telecommunications sectors, which accounted for 51 per cent of take-up. In a distant second came the finance sector, accounting for 20 per cent. This raises another question of whether we’re shoving too many eggs into one basket. If big tech was to pull out tomorrow, Grand Canal would be as quiet as Ballaghaderreen on a December morning.

“Clearly, if there’s a sudden shock to the system and one of them has to pull out, that would clearly have adverse effects,” Lisney’s Paul Hipwell told this newspaper last month.

This premature concern may be misplaced. The suggestion from those familiar with the Dublin market is that, for the most part, there’s far less risk than there was before.

“There are very few new leases signed with a break option within the next 10 years,” says Goodbody property analyst Colm Lauder. “[Developers are] trying to have responsible income streams and de-risk these things as much as possible.”

Compared to London, one source in a multinational financial services company said, Dublin has more supply. “The potential risk is greater but, at the moment, it seems to have more tenant demand [than London].”

They noted, however, that Dublin has typically been a cyclical market in the past, even more so than London. From an international investor point of view, more worrying is the fact that the market is prone to sudden changes in regulation and central government policy, industry insiders say. The surprise and unwelcome change in commercial stamp duty announced in the recent budget is cited as an example.

Savills Ireland chairman Roland O’Connell says all property markets are cyclical “and there’s no doubt that, at some stage, we’ll end up in a slightly oversupplied situation and that we’ll see a bit of a downturn, but I don’t think we see it yet”.

For investors, he thinks Dublin still provides promising opportunities. “As a buyer to develop, I still think it’s a good time. Assuming you’re buying your sites at sensible values, it is still profitable to develop offices.”

Office rents currently hover around the €65 per sq ft mark – not far off the prime peak. If pricing is an indicator of what stage of the cycle the market is at, then surely a slowdown is to be expected. Goodbody predicts rents will float between €60 and €62.50 per sq ft in 2019, slightly lower than the highs of this year.

Mr O’Connell, however, suggests market equilibrium is still about two years off.

Craig Wright, a European property analyst with Aberdeen Standard, agrees. “We think the supply coming on stream between now and 2020 will largely be absorbed and that should mean rents will remain stable,” he said.

Sources familiar with the real estate investment trusts operating in Ireland signal they have learned lessons from the mistakes of previous cycles. Both Hibernia Reit and Green Reit have gradually weaned their portfolios off speculative development as the market begins to normalise.

For Green Reit, a play into the logistics market could be seen as an insurance policy against a fall in office take-up. One person knowledgeable on their strategy suggests however, that the company believes the market is operating in a well balanced manner. But they did highlight transport infrastructure for residential developments as a constraint.

Whatever about the mixed messages coming from the industry on how the Dublin office market is performing, people agree that the constraints in Ireland are still significant, something that could potentially deter prospective investors or movers.

Mr Wright highlighted issues with housing and school places and said: “I know it’s been an issue for chief executives moving to Ireland. It’s been a barrier, but it’s discussed in the market as a constraint.”

The lack of thought given to how these office spaces will be serviced with a corresponding volume of residential units is clearly an issue of concern for speculative investors. John Ring, head of research at Knight Frank, said in residential terms, “it’s no doubt been an issue”.

“The low delivery has been high on the agenda for multinationals. It’ll probably take a couple of years to resolve itself.”

Despite that, Mr Ring says new demand is emerging from Asia, with institutional investors there, content with a lower rate of return, showing interest in Dublin – now seen as a core European market.

Buyers from the US and Europe account for 29 per cent and 22 per cent respectively, a statistic that shows the “considerable depth in the market”, according to Knight Frank.

And although yields dropped to 4 per cent in the second half of last year, that was still competitive compared to European peers, with German and UK office yields below 3.75 per cent, according to Goodbody.

For some time, the Dublin market hasn’t been one that favoured tenants. Only last month, Lisney suggested the presence of tech firms in the city centre is pushing indigenous Irish business to seek space in the suburbs.

“It remains a landlords’ market,” said Tony Waters, managing director of real estate agency HWBC. On the comments from O’Brien, Mr Waters said it was sensible to be prudent after five years of gains, “but all the indicators are that there is ample demand for space as it is completed, and close to 40 per cent of the space planned for 2018 is already pre-let”.

This week, would-be investors in the logistics sector got another boost when Core Industrial Reit announced its intention to float. Perhaps in the not-too-distant future, the limelight in commercial property will be shone firmly on the industrial sector, which delivered returns of about 14.5 per cent for the 12 months to the end of September, according to the MSCI Ireland property index. Whether success in logistics will be at the expense of the office sector is anyone’s guess. But if Brexit doesn’t provide the expected boost to staff numbers in Dublin, the market could become one in which tenants can have their cake and eat it once again.

“That’s probably a good thing for the market overall that there’s choice for tenants,” Roland O’Connell from Savills said.

While it’s difficult to find somebody who signs up to O’Brien’s thinking that we’re on the verge of an office bubble, Ireland hasn’t exactly had a healthy relationship with property and perhaps his crystal ball is right to indicate a slowdown in the market – something tenants, or at least those who have been priced out of the city centre, would undoubtedly welcome.