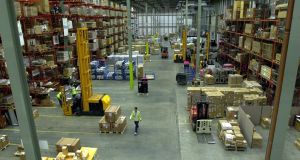 US hedge fund York Capital has lined up former executives from the National Asset Management Agency and Applegreen to join the board of an Irish industrial and logistics property trust, Core Industrial, that it plans to float next month.

Core Industrial issued a statement on Tuesday confirming that York Capital plans to list the fledgling company on the junior Dublin and London stock markets, raising up to €225 million.

The Irish Times first reported the plan last month, and that York Capital was lining up Daniel Donovan, a former partner with UK property investment firm Grainmarket Asset Management and one-time Lehman Brothers employee, as Core Industrial’s chief executive, with Dublin-based property figure William Redmond hired as the company’s chief investment officer. Both have worked with York Capital in recent years and are set to benefit from a potentially lucrative incentive scheme at the listed company.

Andrew Craig, a former audit partner with PricewaterhouseCoopers, will serve as the company’s non-executive chairman, while Diego Arroyo Ornelas, a senior vice-president at York Capital, will also be on the board.

York Capital, which has about $20 billion (€16.2 billion) of assets under management, plans to put almost €83 million of industrial units into the quoted company, it said. This includes property in locations such as Rathcoole, Clondalkin and Finglas in Dublin that it snapped up after the property crash.

The New York-based fund will sell about 18 million shares at €1 each as part of the IPO, leaving it with a remaining 9.9 per cent stake in the business, which will have an initial market value of about €250 million.

The industrial sector emerged last year as the hottest area of the Irish commercial property market, delivering total returns of about 14.5 per cent for the 12 months to the end of September, according to the MSCI Ireland Property Index. That compares with a 10.5 per cent return during the same period for the office market, which initially led the property recovery after the crash, and 10.8 per cent for the retail investment sector.

Core Industrial plans to acquire more industrial assets in the greater Dublin area, but has ruled out “speculative development” for the time being.

Goodbody Stockbrokers analyst Colm Lauder said he was “surprised” at the small lot sizes of the industrial units York Capital is putting into Core Industrial.

“These will be predominantly lower-grade, older assets, often with outdated access options, potential structural and environment issues associated with older stock and generally higher-risk tenancies,” Mr Lauder said. “The ability to scale up seems limited given the small market size.”

Senior management at Core Industrial are set to enjoy a bonus plan entitling them to 15 per cent of shareholder returns above an initial threshold of 10 per cent total returns a year . They stand to receive 20 per cent of returns in excess of a 15 per cent annual “hurdle”.

Management will also reinvest in Core Industrial about €2.5 million of gains they have received to date for managing the initial portfolio of York Capital assets.