High-density residential site near Navan for sale for €8.5m

Blackcastle lands could host 1,100 houses plus new high street, according to agent 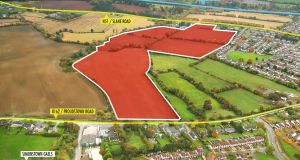 Blackcastle land outside Navan, Co Meath: The land was originally designated as the Clonmagadden Valley Strategic Development Zone before the property crash

A 59-acre site zoned for a high-density residential development on the outskirts of Navan, Co Meath, will be offered for sale from today at about €8.5 million.

The Blackcastle lands, located between the Slane and Kingscourt roads and currently in agricultural use, form part of the Navan Development Plan, which was originally intended to speed up new housing schemes and open the way to higher densities.

The land was originally designated as the Clonmagadden Valley Strategic Development Zone (SDZ) before the property crash, when Navan was expanding at a rapid rate to cater for the fast-growing commuter traffic. The 2016 census found that the population of Meath had increased by 10,807 people or 5.9 per cent – almost twice the national average.

With a large proportion of the new homes in Navan owned by Dublin-based workers, the Fianna Fáil government moved to open a direct rail link between the capital and Navan. The service began operating within a short period between the city and Dunboyne but was not extended any further after the banking crash.

CIE still caters for the Navan commuters, operating more than 40 buses a day to Dublin alongside a considerable number of services by private bus operators. There is no mention of the railway line being extended to Navan.

Robert Colleran of CBRE, who is handling the sale of the Blackcastle lands (they were offered for sale in 2016 but did not attract a buyer), is telling interested parties that the green fields may accommodate 1,100 houses, including a new high street with shops and civic buildings, cafes, primary school and a medical centre.