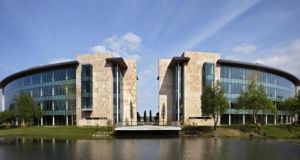 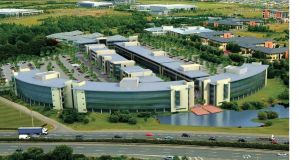 The financial services giant Fidelity Investments is to lease a substantial new office block at the front of the Citywest Business Campus in west Dublin.

The American company already employs about 250 staff in a separate office building in Citywest. It also has around the same number of employees in Galway.

The company has completed contracts to lease the entire 5,267 sq m (56,595 sq ft) of space in 1 Waterside, a distinctive curved block fronting directly on the busy N7 motorway. The company will be paying a rent of around €172 per sq m (€16 per sq ft) for the building under a 20 year lease with seven year break options. The letting is the largest in Citywest for several years.

Last year the Kerry Group came close to renting the same block for use as a technology centre and at the last moment opted instead for Milennium Park in Naas where it is expected to create up to 900 jobs.

The four buildings in the Waterside complex were funded by private investors assembled by Davy. Only one of the blocks-number 4-with 2,538 sq m (27,286 sq ft) is currently vacant. There is planning permission for two further blocks.

Fidelity Investments was targeted by the IDA in the early 1990s as part of a drive to attract the world’s top financial service companies to set up operations in Ireland. It originally operated a computer software and technology development centre in Harcourt Street in 1996. It later relocated to Citywest and in 2001 it launched a separate operation in Galway.

Last November Fidelity announced plans to add 200 new positions in Dublin and Galway to fill roles in technology, back office operations and enterprise services. Mr Travis Carpico, president of Fidelity Investments Ireland, said at the time that by continuing to invest here Fidelity was building on its strategic, long term decision to invest in a region with a well educated, highly skilled workforce from which they could draw the quality talent needed to provide a diverse range of services to multiple businesses across the firm.

Fidelity Investments had managed assets of $1.7 trillion at the end of last September.

1 Johnny Ronan loses out on €315m Dublin docklands deal
2 Can Big Tech’s backing install Biden in the White House?
3 How long can Government afford to keep State pension age at 66?
4 Revenue accused of harassing businesses over Covid wage subsidy scheme
5 Give your home a smart makeover with some clever appliances
6 Ryanair and Aer Lingus to cut further flights from regional airports
7 Grafton Street landlord cuts high street property values by 26%
8 Apple iPhone 12 Pro: Well worth the wait
9 Updating an outdated concept in body armour
10 PTSB’s €1.4bn sale is a sign it is preparing for a fresh loans crisis
Real news has value SUBSCRIBE