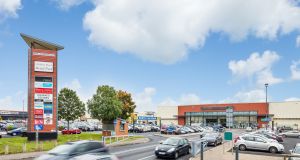 One of the most successful retail parks outside Dublin, Childers Road Retail Park in Limerick, will be of interest to a broad range of Irish and overseas investment funds when it goes on sale from today.

Joint agents HWBC and DTZ Sherry FitzGerald are guiding €44 million for the fully occupied park which will give new owners an income return of 7 per cent.

The facility was developed over ten years ago by Alan and Brian McCormack of Alanis with funding from Anglo Irish Bank. The bank’s successor Harcourt Life is now handling the sale of the park after acquiring the entire share capital of IBRC Assurance Company.

Childers Road is producing a rent roll of €3.22 million from 14 tenants including the recently signed UK home, garden and leisure retail chain The Range which is to rent a store extending to 4,877 sq m (52,500 sq ft). The Range is also believed to be eyeing up three other Irish locations which will be in direct competition with Woodies.

The dominance of the Childers Road park is greatly facilitated by a good road system and the availability of up to 1,000 free parking spaces.

Jonathan Hillyer of HWBC said the Childers Road park was a rare investment opportunity as it offered a mix of open retail occupiers as well as more traditional retail park names. This future-proofed the park when compared with its peer group in Limerick and the region as a whole, and one expected to see a better than average rental growth and occupier demand as a result.

Kevin Donohoe of DTZ described the tenant line-up in the park as “second to none” and said the sale should attract institutional investor interest as well as that of private sources of capital which had been targeting the Irish retail market in the last 12 months due to its strong fundamentals.