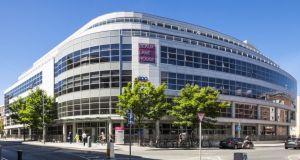 Beaux Lane House: Reputed to have been developed at a cost of about €20m

The Royal College of Surgeons in Ireland (RCSI)has sold a substantial office block at the rear of Dublin’s St Stephen’s Green Shopping Centre to German investors for €59 million.

Profits from the sale are expected to be used to part finance a new €80 million School of Pharmacy on York Street and to upgrade part of the adjoining Ardilaun Centre on St Stephen’s Green.

The 13-year-old office building on Lower Mercer Street is reputed to have been developed by the college at a cost of around €25 million. Office space in the block has been in heavy demand over the years because of its high-quality fit out and primary location.

Real IS, a Munich-based property adviser which handles property investments for a range of German pension funds, has emerged as the new owner of the block, paying €2 million over the guide price set by Clive Roche of selling agent DTZ Sherry FitzGerald.

Adrian Trueick of Knight Frank advised the purchasers on their first Irish investment.

The six-storey over basement block is fully occupied though under rented and producing a rental income of €2.739 million. This figure is due to rise to €3.136 million now that the college has opted to retain its office space on the lower ground floor and start paying a rent of €320 per sq m (€30 per sq ft). Even at that figure the college is getting good value as the open market rent for similar accommodation in the St Stephen’s Green area starts at €457 per sq m (€42.50 per sq ft). The new lease is due to run for ten years.

BDO, the world’s fifth largest accountancy firm, leases 59 per cent of the building on four floors under a 20-year lease from 2002. Other tenants in the 9,775 sq m (105,217 sq ft) block are Legal and General, Michael Page, Riot Games and Hartley & Marks.

The building is arranged around a central atrium allowing natural light to permeate through much of the block. It is fitted out to the highest specification with access to the upper floors via two high speed lifts.

The RCSI sale will allow the college to fund the further enlargement of its St Stephen’s Green campus where it caters for 2,500 students, 20 per cent of them Irish.

Separately, the college is to embark on the refurbishment of Block A of the Ardilaun Centre which dates from the 1970s and forms part of a 13,006sq m (140,000sq ft) office complex.

Block A, extending to 7,432 sq m (80,000 sq ft) will be occupied by administrative staff and will also be used for academic activities when it is upgraded. The remainder of the complex is partially let to office tenants. The Ardilaun Centre was originally occupied by Eircom, which had to buy its way out of the €5 million-a-year office lease when it transferred to a new headquarters opposite Heuston Railway Station.

The college was founded in 1784 as an independent not-for-profit international health sciences institute which includes the largest medical school in Ireland as well as being the national body responsible for the regulation of surgical training in Ireland.