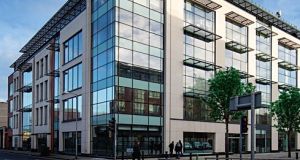 A Norwegian investor who paid €28.65 million in April 2015 for an office block in Smithfield, Dublin 7, has sold the property in an off-market transaction for €57 million – a 99 per cent increase after less than four years.

The investor did, however, refurbish the block during their ownership – at a possible cost of up to €5 million – but this doesn’t take much away from their spectacularly well-timed foray into the Irish commercial property market.

Michele McGarry of Colliers International acted for the vendor and Cushman & Wakefield for the buyer (a fund connected to Credit Suisse). Agreed just before Christmas, the deal for the Infinity Building underlines the strength of demand for good quality office investments outside the central business district.

About 85 per cent of the offices are let to Government tenants – including health agency Hiqa, the Director of Public Prosecutions and the OPW – while the remainder is occupied by the Law Society.

In addition to blue chip tenants, its proximity to the Luas was another big selling point – as was its location close to the new DIT campus in Grangegorman and Dublin’s “legal quarter” around the Four Courts.

It was originally developed as George’s Court by Liam Carroll’s now defunct Zoe Developments in the early noughties but was sold, with three vacant floors, on the instructions of statutory receiver David Carson of Deloitte in 2015.

This rent, however, was brokered in 2016 and market rents for the area are about €300-€350 per sq m (€27.87-€32.50per sq ft). The Law Society, which occupies the 1,270sq m (13,670sq ft) fourth floor, has a rent review pending. This means the new purchaser has obvious asset management opportunities to increase the rent roll. The building also contains two vacant retail units – one of which is reserved by the OPM.

The same Norwegian investor also acquired the Ulster Bank building at 2-4 Lower O’Connell Street for €11.437 million in October 2014. It then had an unexpired lease term of 23 years at a rent of €549,856 per annum. International property manager AEW bought this landmark branch for €12.5 million in February 2018 in a deal which will show a yield of about 4.5 per cent.