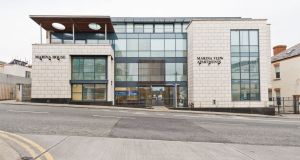 The four-storey, over-basement Marina House in Dún Laoghaire has a particularly high specification

Two separate office investments in the modern Marina House off the Old Dunleary Road in Dún Laoghaire, Co Dublin, are to be offered for sale by private treaty through Turley Property Advisors.

The four-storey, over-basement building located halfway between the Dart stations at Salthill and Dún Laoghaire has a particularly high specification including raised access carpeted floors with floor boxes wired for power and computer cabling. The offices also have air-conditioning and Cat 2 lighting.

Turley is also quoting €750,000 for 638sq m (6,867sq ft) on the second floor which was specially designed so it could be let in two sections. The entire floor and four parking spaces are let to the Digital Marketing Institute until next November at a rent of €75,165.