BoI looking for at least €35m for interlinking office blocks, which will be vacated 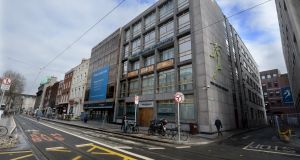 The long-standing headquarters of New Ireland Assurance at 9-12 Dawson Street, Dublin 2, is almost certain to be demolished and replaced by a higher volume office block with extensive shopping facilities on the ground floor when it it sold shortly by owner Bank of Ireland.

Mark Reynolds of Savills Ireland plans to seek in excess of €35 million for the two interlinking five- and six-storey office blocks which date from 1964 and 1971. They will likely be of interest to overseas funds as well as Irish-based developers.

By coincidence, the complex is three doors away from the distinctive Trailfinders block, separately owned by property developer Gerry Gannon, which also goes for sale this week at more than €7.75 million.

New Ireland, a wholly owned subsidiary of the Bank of Ireland, plans to sell the 4,461sq m (48,018sq ft) buildings with vacant possession, moving some of its 450 staff by early this summer to an adjoining office block occupied by the bank on South Frederick Street. Other personnel will relocate to alternative bank premises in the city.

A feasibility study by Henry J Lyons Architects suggests there is “substantial scope” to redevelop and extend the New Ireland building and bring the overall floor area up to 6,219sq m (66,941sq ft). The ground floor might well have as much as 929sq m (10,000sq ft) for a retail business.

The upcoming sales might well lead to two simultaneous large construction projects on a busy Dawson Street, where two other significant developments are now nearing completion.

Green Reit is in the final stages of a mixed-use building programme where part of the ground floor has been pre-let to the London-based Ivy restaurant chain as well as the New York-headquartered bread and restaurant group Le Pain Quotidien. Most of the space on the upper floor has been allocated to Barclays Bank for an EU hub if UK companies lose their easy access to the European trading block after Brexit.

Close by on Molesworth Street, Iput Property Fund is building a high-quality office headquarters for AIB on the site of the former passport office.

The substantial changes under way in the Dawson Street area follow the arrival of the Cross-City Luas service with two busy stops.

Specsavers has already served notice that it will open a new flagship store at 40 Molesworth Street. According to retail letting agents, there has been a sharp increase in the number of other inquiries for restaurant and fashion outlets in the same area.

The changes already in train look like turning Dawson Street and Molesworth Street into one of the most vibrant enclaves in the city.

Mark Reynolds of Savills says the “exceptional location” of the New Ireland building, coupled with Dublin’s strong economic growth, make the proposals a “unique proposition and a prime development opportunity”.