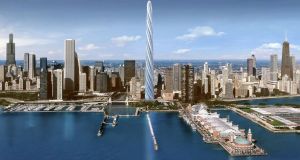 The proposed Chicago Spire: The 1,200-unit scheme was designed by renowned Spanish architect, Santiago Calatrava, while actor Liam Neeson was recruited to help with the pre-construction sales launch.

Property developer Garrett Kelleher is suing Nama for $1.2 billion in the US over his loss of control of the Chicago Spire residential tower project, which he alleges Nama caused by acting out of “spite” against him.

Through one of his companies, Shelbourne North Water Street, Mr Kelleher has filed a case against Nama and its subsidiary, Nalm (National Asset Loan Management), in a court in Illinois.

Mr Kelleher’s legal team names several current and former high-profile Nama officials, whom they say they will “subpoena”, or compel to give evidence as witnesses in the US. These include Nama’s chairman, Frank Daly, and its chief executive Brendan McDonagh. The list also includes former senior Nama official John Mulcahy, who now chairs Glenveagh Properties, as well as Kevin Nowlan, now the chief executive of Hibernia REIT.

New York lawyer Joseph Bainton, his lead lawyer, said on Thursday that Storm Emma has prevented his client from officially serving legal papers on Nama. He expects papers to be served on Monday.

Nama says it first learned of the case from media and believes it has “absolutely no basis”. It said it will seek “full dismissal of the claim”.

It is the latest legal action by Mr Kelleher against Nama, who has launched several suits in Irish courts. This is the first time he has sued Nama in the US, where the State agency faces the prospect of a jury trial.

Mr Kelleher alleges Nama’s “wilful and malicious” conduct cost him $525 million in cash and equity that he says he forfeited as a resulting of losing control of the Spire. He is also suing for $685 million in future profits that he alleges he has been deprived of by losing the project.

The case centres on Mr Kelleher’s pre-crash grand plan to build a 116-storey, 2,000 sq ft residential tower, the highest in the US, in central Chicago financed by Anglo Irish Bank. The 1,200-unit scheme was designed by renowned Spanish architect, Santiago Calatrava, while actor Liam Neeson was recruited to help with the pre-construction sales launch.

Mr Kelleher says he spent about $300 million preparing the two acre site and building the substructure, before the financial crisis hit in 2008. When Anglo started to pull its horns in on lending, Mr Kelleher’s companies owed $600 million, including $90 million related to the Spire.

Mr Kelleher alleges he was told by Nama that all of his Anglo loans were transferred to the agency in 2010. He claims he later became aware that, in fact, the Spire loans weren’t transferred until mid-2013, and in the intervening period had remained with Anglo, later IBRC.

He alleges he approached Nama in early 2013 with a deal to redeem his Spire loans at par, with finance from Andy Ruhan’s Bridgehouse Capital, and he details meetings with senior Nama officials over the offer.

A disagreement later arose during due diligence, and Bridgehouse declined to sign a non-disclosure agreement and a deal did not proceed. The loans, he says, were later in 2013 transferred to Nalm and sold to billionaire Stephen Ross’s RMW Acquisition for $57 million less than the proposed offer.

As relations between Mr Kelleher and Nama soured over various issues from 2013, he alleges it acted against him out of “sheer spite”. His legal complaint blames it for not telling him that the Spire loans were held by IBRC, to whom he had greater freedom to make a “workout offer”.

The site – in effect a huge hole in the ground – remains undeveloped in Chicago.