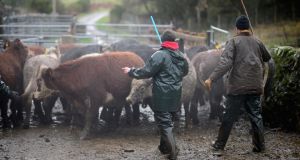 People are eight times more likely to die working on a farm than in the general working population in the State, the Oireachtas Committee on Agriculture has heard.

Health and Safety Authority chief executive Martin O’Halloran said 193 people had died on farms between 2005 and last year, and the devastating impact of these deaths had transcended generations.

The vast majority of these incidents were “foreseeable and preventable”.

He said farms had changed greatly in recent years, and this factor had contributed to farm deaths. “The machinery has got bigger, he said. “The animals have got bigger. They’ve certainly become more flighty,” he said.

“The days of feeding calves with a bucket and walking the cows home, they’re certainly in the historic annals of husbandry practice on farms.”

Independent TD Michael Fitzmaurice said improved breeding also meant animals were more “flighty”, or temperamental. He said he had sent some cows for slaughter because he felt they were too dangerous to have around children.

“As people get busier . . . an animal is more used to a jeep or a tractor looking at them than a person, and the contact [between human and animal] is less and less.”

Mr Fitzmaurice also said farmers were under a lot of pressure to get work such as slurry-spreading done within a certain timeframe - which could lead to mistakes.

“We plan to have involvement with 50 discussion groups . . . they operate on the principle of peer-to-peer influence,” he said.

Academic research in that area had found that this was a very effective way to bring about cultural change.

His colleague, senior inspector Pat Griffin, said Teagasc research had found that 58 per cent of fatalities occurred on dairy farms.

“That rings huge alarm bells in my mind, given that the quotas are going to be done away with on the first of April and lots of farmers are going into expansionary mode in dairy farming,” he said.

“Certainly we are facing quite a difficult situation trying to help these farmers to protect themselves.”

Mr Griffin said 2009 marked the lowest number of farm deaths, when 11 people were killed, but this was at the height of the recession. “Construction sites closed down.

A lot of the sons and daughters of farmers went back to the farm and in 2009 no person over the age of 65 was killed on a farm because there was help around.”

He said insurance companies should give farmers a discount if they provide a certified safety audit.

Mr O’Halloran said this idea had been raised by the HSA in the past and it was worth returning to.

Committee members shared their own experiences of farm incidents. Fine Gael’s Martin Heydon recalled how he fell from bales as a child and was lucky to escape with a few cracked ribs.

Labour’s Willie Penrose said, “In the ’60s and ’70s when we were growing up, we pursued some activities that now would be frowned upon.”

He said the HSA “would have taken me by the back of the neck” if it saw some of the risks he had taken on the farm.

Lucy Kellaway: Poolside working no longer a sign of importance 29 Aug
Project Eagle: What was it and why is it in the news? 20:13
Stocks decline on poor corporate earnings 17:44
AIB defends ‘incredibly’ high €1.2bn loans charge as 2008 haunts 17:31
Microsoft now looking to acquire TikTok’s entire global business 16:57