Embrace your spirit and enter the other world of Púca Festival

Enjoy an array of exciting events and gigs across Athboy, Trim and Drogheda, from October 31st to November 2nd

Enter the other world of Púca Festival 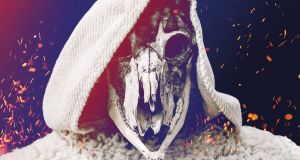 Samhain Festival, Ireland’s traditional celebration of Halloween and harvest, sits on a threshold - between the light of summer and the dark of winter. It divides the year. Splits it in two. And from this split a tear appears and breaks the barriers between our world and that of the 'Other'.
This otherworldly moment has become an occasion celebrated all over the world from Mexico’s Day of the Day parades to the USA’s trick-or-treating rituals. But long before the rest of the world, Ireland was celebrating this great druidic festival. It is here that it all began.
And so Púca Festival has been created. A brand new festival reclaiming Ireland’s original Halloween celebrations. It is named after the mischievous, shapeshifting spirit, Púca who will be your spirit guide across the three-day celebrations, alongside the other Samhain beings: Boann, the spirit of Light; The Morrigan, the harbinger of Dark and mischief-maker, Fear Dearg.
[ More information and tickets can be found at pucafestival.com]
Púca doesn’t just invite you to spectate. The festival opens with the traditional procession in Athboy from Fair Green up to the Hill of Ward. Join people from Co Meath and around Ireland to walk to this ancient, archaeological site where evidence of early druid activity has revealed some of the early origins of Halloween, which still shape the annual festival today. Through theatre, fire, spectacle and storytelling, celebrate the coming of Samhain and truly feel the worlds shift.
Nearby Trim plays host to three days of Púca’s music, fire, feasting and mischief. Create your own mask using the templates on the Púca website, or come along early to a workshop and choose your spirit tribe from Boann, The Morrigan, Fear Dearg and Púca. You then take your place in the parade to the beat of the Armagh Rhymers and among the spectacular characters of Luxe as it gathers and moves through the streets of this beautiful small town in Meath to its stunning centre piece, Trim Castle.
The arrival at the Castle triggers the switch-on of eight different artists' illuminations. The stunning ruins are the backdrop for this, which unlocked by 21st-century technology are transformed into a playful playground for you to explore. From Illuminos bringing the walls of the Keep clanging down and bringing the characters of Samhain to life, to Seb Lee-Delisle’s Lightning Strike on St Mary’s Abbey or Impossible Arts interactive installation, The Tale of Dullahan which brings three projected heads to life with the help of visitors to tell this ancient Irish Samhain story.
Don’t miss the exceptional gigs at Trim Castle, the Trim Castle Concerts across the three days. The anarchic delight that is Jerry Fish (pictured above), with his Púca-ed up Electric Sideshow will open the festival and bring circus, cabaret, mischief and mayhem to the other world and tempt even the darkest spirit to have fun.
Some of Ireland’s hottest new bands will take to the stage on the second night of Púca, unleashing their own unique sounds across the atmospheric setting of Trim’s castle ruins. Don’t miss Just Mustard, Pillow Queens and AE Mak, as this next generation of music makers cause havoc in the ambience of the other world.
And world-renowned DJ and producer, Kormac will take to the stage with his Big Band and the Irish Chamber Orchestra, on the final night, creating their sound spectacular, innovative multimedia Equivalent Exchange to see the spirits out. Echoing the coming together of different peoples in times gone by, this coming together of musicians and musical traditions captures an essence of ancient Samhain.
The ancient town of Drogheda is also hosting some exceptional artists across the three-days to evoke the other and celebrate world-renowned Celtic folk traditions.
Acclaimed composer, Matthew Nolan will set the scene, with a group of musicians on October 31st, with a live performance of his brand new score set to Häxan, an early 20th-century Scandi cult horror film that has never been screened in Ireland before.
Candlelit Tales will use the ancient skill of aural storytelling, to bring the epic tale of Shadows of the Tain alive, accompanied by live musicians, and with the magic of shadow puppetry.
And sensational singer-songwriters, Lisa O’Neill, David Keenan (pictured), SIVE and Dani, who’s own rawness and energy would challenge any spirit, will take to the stages at the Crescent Concert Hall during Púca.
Pitting light against the impending darkness as the darker half of the year begins, Drogheda too sees key landmarks lit up. de:Lux brings together local artists from across music and the visual arts to create installations in a 48-hour period. The Tholsel, Saint Laurence’s Gate and Old Abbey Lane will be transformed for the period of Púca, and a special de:Lux commission will light up Millmount with work by local artists Declan Kelly and Els Boghart.
And after three nights of light, music and fun, Púca vanishes leaving us to the dark wintery months ahead.
Do something different this Halloween, come alive in the dark and awaken your spirit at Púca.
More information and tickets can be found at pucafestival.com