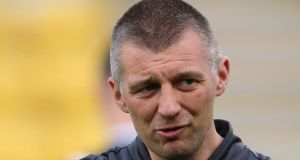 Bray Wanderers lost its second manager this year when Trevor Croly announced at the weekend that he was leaving the club. File photograph: Cathal Noonan/Inpho

Bray lost its second manager this year when Trevor Croly announced at the weekend that he was leaving the club, which is wrestling with financial and organisational problems.

Mr O’Connor wrote to Bray Wanderers’ shareholders last month on behalf of Millway Dawn, a company of which he and fellow club board member Kieran Kelly are directors, offering to buy them out for half a cent a share.

However, long-standing shareholder John Deering has offered €0.006 – three-fifths of a cent – a share and has called an extraordinary general meeting for next Saturday.

Mr Deering represents a number of shareholders who are concerned at the way Bray Wanderers is being run and who have been seeking a general meeting for some time to discuss those concerns.

He has submitted a list of 70 questions on behalf of those shareholders to Mr O’Connor and Mr Kelly.

Shareholders are questioning Mr O’Connor’s and Mr Kelly’s appointments to the Bray Wanderers board in the first place and are seeking to establish whether the chairman has any connection with the company’s auditors, Ecovis BBT.

They also want to establish whether the board allowed Millway Dawn to use Bray’s headquarters, Carlisle Grounds, as its registered and trading address and asking whether the club is being paid for this.

They also point out that Millway is a telecommunications company, and ask why a business involved in this sector is attempting to buy a soccer club.

Mr O’Connor’s letter states that his offer is backed by a number of unnamed “other investors”. The move sparked speculation that Millway may have plans to move Bray Wanderers from its home ground to a new site, and redevelop Carlisle.

The chairman has said he favours joining forces with schoolboy and junior club Ardmore Rovers, to develop a new stadium and leave Carlisle Grounds.

Mr Deering and his backers are seeking confirmation that Carlisle Grounds will “never be developed” as long as Mr O’Connor is a director of Bray Wanderers Ltd.

Mr O’Connor’s letter says he and other investors are committed to “providing the financial and supporting structures to ensure that the company can remain in business on an ongoing basis and to deal with the legacy debt and borrowings that exist”.

Bray Wanderers had accumulated losses of €1 million at the end of 2013. The accounts for that year show it had net liabilities of €202,898 while its auditors questioned its ability to continue as a going concern.