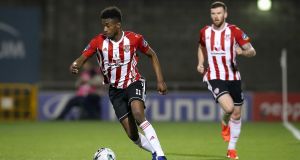 Junior Ogedi-Uzokwe opened the scoring for Derry City in the EA Sports Cup tie against Longford Town at the Brandywell. Photograph: Ryan Byrne/Inpho

First-half strikes from Junior Ogedi-Uzokwe and Eoghan Stokes eased holders Derry City into the EA Sports Cup quarter-finals as they had too much for First Division promotion hopefuls Longford Town, beating them 3-0 at the Brandywell.

The 11-times record winners of the competition had the edge from the start against a Longford side that made 11 changes from their win over Shelbourne last Saturday.

The home side were ahead on 19 minutes when Ogedi-Uzokwe headed home a Jamie McDonagh cross.

Stokes’s goal was all his own work when it arrived on 38 minutes, cutting in off the left flank before curling a shot to the net.

A stunning last-minute strike from Timmy Molloy put UCD deservedly through to the last eight as they came from behind to beat surprise First Division strugglers Shelbourne 2-1 at Tolka Park.

With referee Alan Patchell’s watch on 90 minutes, and the game looking set for extra-time, midfielder Molloy took possession some 25 yards out and cracked a right-foot shot to corner of Colin McCabe’s net.

Shelbourne had led from the very first minute. Lorcan Fitzgerald’s corner was headed back across goal by Ryan Brennan for central defender Derek Prendergast to nod over the line.

Having hit a post through Kevin Coffey, UCD passed their way back into the game with Neil Farrugia deservedly bringing them level on 29 minutes.

Played in by Yoyo Mahdy’s sublime through ball, the Republic of Ireland under-21 international sprinted down the middle for a composed finish, sweeping the ball home off his left foot.