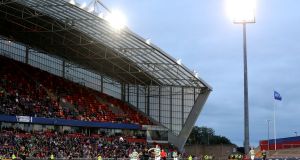 Thomond Park is one of the possible venues to be used to play two full rounds of the Airtricty League behind closed doors. Photograph: Ryan Byrne/Inpho

The FAI has said that it believes that two full rounds of both Airtricity League divisions can be finished behind closed doors later this year for a total cost of €2.6 million but, faced with ongoing scepticism from a number of clubs, interim chief executive Gary Owens told officials on a conference call that if some sides decide to opt out that the others could go on without them.

In its weekly online meeting, the league’s working group was told that the association believes that the medical and other cost associated to complete what would be an 18-match season at four venues – provisionally understood to be Thomond Park, Athlone Town’s stadium, Tallaght and the Aviva – would be €1 million after which another €500,000 would be required to put in place the infrastructure required to stream the games.

On top of that, the association is proposing to divide €1.1 million between the various clubs in order to compensate them for the loss of gate receipt revenue. On the face of it, the figure mentioned amounts to just over €50,000 per club, although the intention is said to be to share it out based on projections submitted by clubs in recent weeks to the FAI in relation to what they would have expected to generate on matchdays.

A number of clubs are said to have expressed reservations about the plan, suggesting that they believe the figures are too low to compensate them for what would be expected to be a six-week pre-season and then around three to four months of actual competition.

One, Cork City, is also believed to have raised issues with the notion that any clubs could be either pressured to go along with the plan or excluded from what remains of the league programme given the impact that that would have on the overall competition.

Owens did not, it seems, claim that all of the required financing is in place but the meeting was told that the association believes it has identified ways of generating more than half of it, around €1.5 million. The association hopes that streaming would also make a significant contribution.

This again caused some clubs to question the viability of the entire scheme although others suggested that they see it as a basis on which a solution to the current problem might be found.

Owens has said, however, that the association is under pressure to come back to Uefa with a plan ahead of a meeting on May 27th when the European federation hopes to progress many of the outstanding issues relating to leagues across the continent.