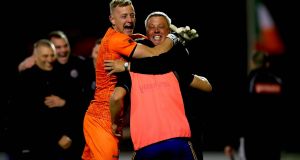 If Keith Long’s side could somehow still turn this title race on its head then this victory might well become the stuff of Bohemians legend with goals from Keith Ward and Andre Wright securing what had looked for the most of the evening like a hugely unlikely win and cutting the gap at the top of the table from eight to five points.

An injury-time penalty by Ward looked to have salvaged a point that, in truth, the home would have done well to have argued they did all that much to deserve. And with 93 minutes played, it looked like wishful thinking when the substitute rushed to retrieve the ball from the net to get things started again. Within another two and half minutes, though, Bohemians had bagged a winner with Wright fouled for a free that Anto Breslin took and the striker then turning the ball home after an almighty scramble in the six-yard box.

When Declan Devine had said beforehand that his side were drawing too many games, he probably didn’t have avoiding another one in anything like this fashion in mind.

It was an amazing turnaround by a side that, having managed just one goal in its previous three outings, struggled even to force a save out of Peter Cherrie over the course of the 90 minutes. And notionally, at least, they were chasing the game for 88 of them.

The home side were a bit better in the second half than the first but they didn’t display enough urgency in either and nothing like the incisiveness they were showing six weeks ago when suddenly starting to look like serious challengers to their cross-city rivals.

Kris Twardek, suspended for an accumulation of yellow cards, was certainly missed, but there was more to it than that against a Derry side that, having also beaten them in the opening weeks of the campaign, just seemed to have the measure of them.

City certainly made much the sharper start and after the home side had bungled an attempt to play their way out from the back found themselves in front before Bohemians really knew what had hit them.

The visitors were gifted the ball 25 yards out when Wright tried to find Keith Buckley with what had looked a straightforward pass but Buckley mis-controlled and Walter Figueira made the most of the unexpected opportunity, taking one touch before slipping the ball through the middle of the Bohemians back four for James Akintunde who, in turn, slipped it past James Talbot.

During the bulk of what followed, they fought doggedly to hold onto their lead with Adam Hamill and Conor McCormack hindering the home side’s efforts to get moving forward and Figueira posing a constant threat on the break. In the end, though, Bohemians simply would not be beaten.