Ken Early: Robbie Keane thriving as a big fish in a small pond

Skipper plays better surrounded by bad players, so he revels in MLS while Pirlo flops 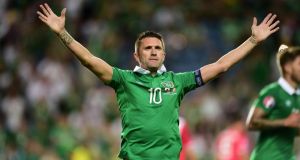 Andrea Pirlo was one of the classiest midfield playmakers in Europe for more than a decade, but it turns out that doesn’t count for much in Major League Soccer.

Pirlo’s first few performances for New York City FC have verged on the embarrassing. Clips of bad Pirlo play have proliferated on social media – crossfield balls to nobody, ballooned set-pieces, and a couple of instances when he didn’t so much jump out of tackles as stand idly by as though the idea of making a tackle hadn’t occurred to him.

The whole MLS experience is in danger of becoming a rather shambolic epilogue to his great career.

Meanwhile, out west, Robbie Keane continues to deliver a stream of superb goals and assists for LA Galaxy. If he sustains his current form another couple of months he has a great chance of becoming only the second player (after the Serbian midfielder Predrag “Preki” Radosavjlevic) to win the league’s MVP award twice, and the first player ever to win it two years in a row.

The European stars who go to MLS in their 30s fall into two general categories. You could call them the thinking players and the action players.

Andrea Pirlo is a thinking player. He famously ran the game against England at the 2014 World Cup, completing 103 passes, while breaking into a sprint on only five occasions. The other midfielders in the game averaged between 30 and 40 sprints over the 90 minutes.

Pirlo’s game is all about intelligent combinations with his team-mates. He strolls about in midfield making no dribbles, runs or tackles. He makes things happen by getting the ball to team-mates in good positions.

Robbie Keane is the other kind of player. His game is not and never has been about working combinations with his team-mates. He’s a reflex player whose great gift is his ability in one-on-one situations. He excels in broken play, when his quick thinking and sharp technique enable him to exploit opponents’ mistakes.

If there are two things you’re going to find in most matches in MLS, they are broken play and opponents’ mistakes.

It’s also become obvious since he moved to America just how much Keane enjoys bullying technically inferior opponents. The drop in standard from the Premier League to MLS has been an exhilarating confidence boost for him.

The security of knowing that he is always the best player on the pitch has enabled him to unleash his inner ninja super-magician.

Meanwhile, Pirlo has looked baffled and demoralised as he tries vainly to impose structure and rhythm on the chaos of MLS midfield battles that are not on his technical or tactical level.

He would probably play better for Chelsea than he does for New York City, while if you put Robbie Keane back into the Premier League, it’s doubtful whether he’d get a kick.

Is the standard of play in European Championship qualifiers closer to that of MLS or the Premier League? It depends on the opposition.

Something about Gibraltar brings out the dominant, MLS version of Robbie Keane. Five goals in two matches against the Rock have enabled Keane to wrest back the title of top scorer in the history of European qualification matches from Cristiano Ronaldo.

Certainly five in two is better than the zero goals in five matches (in which he played a total of 258 minutes) that Keane has managed against Germany, Scotland, Poland and Georgia.

This is a pattern we’ve been seeing for a long time from Keane. Since his debut for LA Galaxy in August 2011, he’s played 32 matches for Ireland, scoring 16 goals. The goals have come against: Estonia (2), Kazakhstan (2), Georgia (2), Faroe Islands (3), Latvia, Sweden, and Gibraltar (5).

He has failed to score in 23 of the 32 matches, drawing blanks against opponents including Spain, England, Italy, Croatia, Czech Republic, Germany, Portugal, Poland, Austria, Russia and Croatia.

The sheer number of international goals Robbie Keane has now amassed – his next goal will equal the international tally of Gerd Müller for God’s sake – has distracted us from the awkward fact that he has scored only one goal against opposition of decent quality in the last four years.

Martin O’Neill substituted him on Friday to save his legs for tonight’s match, rather than leaving him on to increase his own record – a decision that implies he sees Georgia as falling into the category of team Keane can still score against. Germany and Poland are in the other category.

So if Robbie Keane scores on Monday night you should drink in the spectacle and savour the moment. It could be the last time you ever get to do it.