Ken Early: Guardiola yet to remake City in Bayern image

Pep spurns idea that Premier League is tougher than others, but player quality is an issue 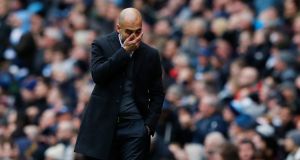 One of the things that makes Pep Guardiola unique among big-name managers is that he is often followed about by a personal Boswell in the form of journalist Martí Perarnau.

In 2014, Perarnau published Pep Confidential, an account of Guardiola’s first season in charge of Bayern Munich. This year, to coincide with Guardiola’s arrival at Manchester City, he produced a second volume: Pep Guardiola: The Evolution.

Pep Confidential was tightly focused on one particular season, while The Evolution is more freewheeling and digressive. It is loosely based on Guardiola’s second and third years in Munich, though it covers some episodes more comprehensively than others.

Bayern’s 7-1 Champions League victory over Roma in 2014 gets its own special section, describing Guardiola’s feverish video analysis, his one-on-one tactical sessions with key players, an account of his team-talk, a match report, and a postscript in which a ruminative Pep sips white wine and muses on the lessons of that stunning victory.

Yet the climactic showdown with Barcelona in the semi-finals of that year's competition is hardly mentioned. All that is said about Bayern’s 3-0 defeat at Camp Nou is that the “injury-decimated” Germans “lost the match not because of Pep’s tactical decisions, but as a result of Messi’s clinical finishing and the visitors’ loss of tactical discipline in the dying minutes”.

At one point, poring over recent Bayern results, Perarnau notices that they score more and concede fewer goals in the second half of their games. He decides this pattern can’t be mere coincidence and asks a member of Guardiola’s staff for an explanation.

“It all comes down to the kind of game Pep plays,” explains Domenech Torrent. “It’s all planned down to the last detail. We take control, maintain possession and run our opponents into the ground . . . And then we wait . . . sooner or later the opposition begin to slow down, they’re pressing less and failing to close down the space. And that’s when we pounce. It’s as simple as that.”

Well, the second half unfolded in a rather different way on Saturday at the Etihad Stadium. Which tells us that Guardiola still has plenty of work to do before Manchester City approach the level of Bayern Munich. City lost control – first of the game and then of their emotions.

The second half was the stuff of nightmares for Guardiola. One of the Pep aphorisms recorded by Perarnau is “the faster the ball moves forward, the faster it comes back the other way”. The way in which the play swung wildly from end to end – most notably in the build-up to Chelsea’s second goal, when Ilkay Gundogan lost the ball in Chelsea’s penalty area and Willian was shooting past Claudio Bravo at the other end a few seconds later – demonstrated that something had gone badly wrong with City’s game plan.

Guardiola became irritable on the sideline, shouting at the referee and sarcastically applauding him. His uncharacteristic loss of control foreshadowed Sergio Agüero’s crazy lunge on David Luiz.

It was the first time in seven years that City lost at home in the league after taking the lead. Losing to a direct rival is bad enough, but the spectacular manner of City’s demise means that the after-effects of the defeat will linger.

The question is whether Guardiola’s effort to introduce positional play to English football will prove any more successful than Louis van Gaal’s attempt to do the same thing at Manchester United.

The way in which City were repeatedly pierced by Chelsea’s rapid, direct play was reminiscent of United’s stunning 5-3 defeat to Leicester in van Gaal’s first season.

As van Gaal would learn, the Premier League is full of fast, athletic players who are strongest on the counterattack. Both van Gaal and Guardiola seek to establish control of the game by bringing the ball out into the middle of midfield in a carefully structured, multipass build-up. The problem is, it only takes one stray pass or miscontrol and someone like Jamie Vardy or Eden Hazard is bearing down on your goalkeeper.

There is also the problem of culture. English crowds don’t like to see the ball played around at the back. Seventeen minutes into Saturday’s match, Bravo and John Stones played a series of passes back and forth to each other, five or 10 yards from City’s goal line, as Chelsea’s attackers closed in. There was a crescendo of discontent from the City fans at a sequence they considered to be as risky as it was pointless.

Unless Guardiola succeeds in re-educating his team’s supporters, City’s enlightened build-up play will be soundtracked by groans of frustration.

Van Gaal failed at Manchester United. Was it because he could not communicate effectively with his players? Was it that the players were not good enough to do what he was asking them to do? Was it because the league itself is a hostile environment for teams that want to control the game?

Guardiola has already dismissed the notion that the Premier League is tougher or more intense than the German or Spanish leagues, and most of his former players speak glowingly of the passion with which he communicates his ideas. But there remains the issue of player quality.

In Perarnau’s books, analogies are frequently drawn between Pep’s style of football and classical music, molecular gastronomy or chess.

“The ‘Munich Philharmonic’ would interpret the same piece of music differently from the ‘Barcelona Symphonic’,” he writes. “If Barca was an orchestra almost entirely made up of violinists then at Bayern, whilst his musicians were less proficient in a single instrument, they could offer a greater variety of expertise.”

Compared with the Bayern squad, the players Guardiola has inherited at Manchester City are tambourine men, roadies and three-chord guitar players. Unless he can add a couple of new virtuosos, the City Symphony Orchestra is going to cause its maestro a lot of headaches.

1 Saracens’ emphatic opening salvo enough to keep Leinster at bay
2 Next stop the Champs-Elysées in green for Sam Bennett
3 Garry Ringrose: Leinster’s defeat to Saracens is ‘heartbeaking’
4 Born to ride, born to win: Sam Bennett, the making of a green machine
5 Matthew Wolff leads US Open but Rory McIlroy is among the chasing pack
Real news has value SUBSCRIBE
Crossword Get access to over 6,000 interactive crosswords