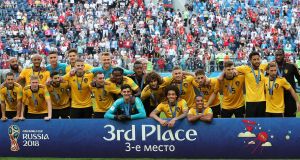 The Belgium squad after their third-place play-off win over England. Photograph: Georgi Licovski/EPA

Still reeling from Wednesday’s heartbreaking semi-final defeat to Croatia, the Three Lions stuttered in St Petersburg as the chance to become the best-ever team to leave English shores passed them by.

Instead Belgium made history by collecting the bronze medal, with England wasting the chance to cancel out Thomas Meunier’s early opener before Eden Hazard wrapped up a 2-0 win for Roberto Martinez’s side.

This was, as Southgate admitted, a game that no team wants to play in, yet it offered the chance for this group to become the second-best side in the country’s history at the end of a summer that will long in the memory.

But like Sir Bobby Robson’s semi-finalists in 1990, England were unable to replicate the heroics of previous matches in the third-place play-off — little surprise given it came less than 72 hours after their semi-final went to extra-time in Moscow.

Meunier exploited those heavy legs inside four minutes and Belgium should have been further ahead as they outclassed England in the first half.

Yet while England missed the chance to lay down a marker against a big team and win a medal, defeat cannot take the gloss off a memorable few weeks that has heartened supporters and shown a glimpse of an exciting future.

Yes, there will be nagging questions of what could have been but this was an undoubtedly positive experience.

In terms of the play-off, Southgate may rue his decision to only make five changes after his emotionally drained side were punished for a sluggish start.

What started as a simple goal-kick ended with Nacer Chadli crossing from the left and Meunier ghosting in ahead of Danny Rose to direct home from close range.

Ragtag England were on the ropes and John Stones’ inability to deal with a simple Romelu Lukaku through pass looked to cost his side, only for Kevin De Bruyne’s shot to be saved by Jordan Pickford following a deflection.

Lukaku was guilty of meeting De Bruyne’s fine pass with a clumsy touch as Belgium cut through Southgate’s team with ease, with Ruben Loftus-Cheek and Harry Maguire headers representing England’s best response until the 23rd minute.

Fine build-up gave Harry Kane a fine chance to almost certainly wrap up the Golden Boot, only for the captain to strike wide after Raheem Sterling collected a fine diagonal ball from Dier and teed up him up.

Martinez’s men dominated the rest of the period from that point, with last-ditch challenges required before Toby Alderweireld rifled over from close range.

Few would have argued had England gone into half-time further behind, leading Southgate to turn to Jesse Lingard and Marcus Rashford for a second half they started resembling a coherent, attacking force.

England were on top for the most part and came close to going level in the 70th minute.

Dier skipped passed Vincent Kompany and coolly clipped the ball over onrushing goalkeeper Thibaut Courtois, only for Tottenham team-mate Alderweireld to get back and hack off the line.

Dier headed wide soon after as England continued to knock on the door, leaving themselves exposed to the counter — something Belgium would have capitalised on had Pickford not superbly denied Meunier.

But Belgium were soon able to land the killer blow. De Bruyne was the architect as Phil Jones tried and failed to cut out his pass, with Hazard racing through to fire past Pickford.

It naturally took the sting out of the closing stages, with the play-off going the same way as their Group G encounter in Kaliningrad.

1 David Clifford sends everyone back to their corners unbeaten
2 Six Nations: A 21st-century tournament that saw Irish rugby come of age
3 Six Nations: Ireland are contenders but England still the team to beat
4 Sublime 67 leaves Rory McIlroy right in the mix at Torrey Pines
5 Limerick roar from behind to sink Tipp and start league in style
Real news has value SUBSCRIBE
Crossword Get access to over 6,000 interactive crosswords