June 30th, 1990: With a country in carnival, Maeve Binchy discovers a new class of football fan 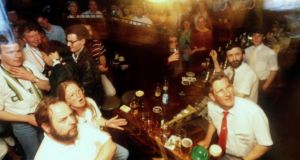 There’s a skill too in knowing what to order as a drink.

The hairdresser is much busier than usual today. Normally a Saturday afternoon is good, he says, but not like this. Some have even booked in for highlights. Well they saved so much on not going to Rome, they deserve to spend a little on themselves. And in another part of the forest two women are getting new outfits.

It’s a bit of a poser. Nothing silly like a green satin track suit, but still something smart and a bit of fun. It’s an outing, it’s something to dress up for.

The couple who are having a party are worried sick. There’s the view that says, go on capitalise on it, build the evening round it. There’s the other argument which says everyone who has agreed to come will want to be somewhere else, cancel it while there’s still time to get out honourably. It has been a week of racking indecision. The girls who heard it was massive fun in The Goat wonder could it ever be as good again or would the crack nave moved to another place this time?

The rules have not really been written for yuppie soccer. Now, if it had been a rugby match the drill would have been much clearer: everyone would have known where everyone else would be and what they would be wearing, drinking, doing and singing.

But this is new territory, this huge outpouring of excitement is for a game which until 10 short days ago was something that belonged to other people, to serious soccer fans who went to Dalymount, to kids who had the names of English football teams on their schoolbags, to people who filled in the Pools, and sometimes lamentably to the hooligans across the water who sang “Here We Go” as they marched out to violence.

And all over the land a new language is being learned, not just the rules for offside, and how to know when it’s a corner and when it’s a goal kick. But more important things. Like when to shout at a prostrate player to get up out of that and get on with it, or when to roar for the ref and cry for retribution. You have to know when to start singing Olé Olé, rather than begin it at the wrong time when the whole pub is one taut tendon of tension.

There’s a skill too in knowing what to order as a drink. Men are safe enough with pints, and the artistry is to take your own tray to a pub, you’ll be the envy of the place, with everyone asking you where you got it and nobody believing that it came from your own kitchen. The women ordering complicated rounds could be frowned on, if two are having vodka and white, two gin and slimline, one bacardi and coke, just a Ballygowan this time and lots of ice . . . it ‘s getting a bit hairy. What they like you to do is all drink white wine. Everyone likes that, the barmen, anyone hacking their way to the bar to buy it, the people near you. That way it can just be passed over the heads of the crowd.

There was a very determined girl at University College with us who told us seriously that the way to get a husband was to buy a sheepskin coat, learn the rules of rugby and go to Lansdowne Road. As a game plan it worked for her, a long time ago. I wondered whether in middle age she had any similar instructions on how to keep a husband now that the shape of the ball and the nature of the enthusiasm had changed. She was startled at my long memory but agreed that the sheepskin coat had been a good investment. Only recently had it gone to the dog kennel as a comfort to the labrador pups.

In her case it was simple, they would all be looking at it on the television at the golf club. The tables were already booked for dinner afterwards. There were going to be drinks and canapes in someone’s house first . . . this woman was incredibly artistic . . . they would all be in the Irish colours and she was going to decorate the table like a soccer pitch. They had thought about going to the RDS but decided that it would be more fun to do it with people they all knew, in a setting they know.

The students who couldn’t wait to get away from home and who are working in London and Boston for the summer wish that their timing had been better. Every night on their televisions they see a country in carnival, a Dublin city gone mad. In no other June in their memories did people wander around the streets all night beating drums, did guards on point duty ask passing motorists the score, did total strangers embrace each other in crowded pubs. It was the wrong summer to go away.

Nobody has ever been able to explain even credibly, let alone satisfactorily, the distinction of class in any society.

And nowhere does it sound more pathetic than when people try to explain it in terms of sport. Tell Americans that rugby is a middle-class game in Ireland, Scotland and England and a working class sport in France and Wales and they will be rightly bewildered.The various ball games that fill the stadiums in the United States know no such niceties.

There has been no crowing cry of we-told-you-so from those who always followed soccer, no derision of those who came to the game late because of Pavarotti and Packie and of the whole place going mad and declaring holidays for itself. True soccer fans have known that this was the game, and here was the footwork, the excitement and the style. This was no afternoon of scrums and line-outs and seeing the action as soon as it began.

And they’d still be there when the euphoria dies down. And they are tolerant today as the new fans twitter their excitement, and forget their plans, plans that might include the DART because of the fear of people being too excited in cars, and indeed even the teeniest fear of oneself becoming too excited in one’s own car.

There is a generous spirit abroad which is greater than the old confused sense of difference. The only enemy this evening is the begrudger. Just remember not to talk when anyone is taking a penalty