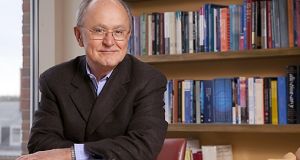 The Harvard professor overseeing a review of Fifa’s human rights policies has claimed that if the embattled governing body is serious about reform it could be a landmark moment for “advancing human dignity around the world”.

John Ruggie, who developed the United Nations Guiding Principles on Business and Human Rights, will deliver a set of recommendations to football’s crisis-hit governing body in March. By then, Fifa will have a new president, with Uefa’s general secretary, Gianni Infantino, and the Asian Football Confederation’s president, Sheikh Salman bin Ebrahim al-Khalifa, considered the frontrunners to succeed the suspended Sepp Blatter.

The Qatar 2022 World Cup has been beset by criticism over the rights of migrant workers building the stadiums and associated infrastructure. Other sporting events, including World Cups in Brazil and Russia and the Olympics in Sochi, Rio and Beijing, have faced human rights concerns over a variety of issues.

Salman has also faced criticism from human rights groups, who claim he had links to the targeting of players and teams in the wake of 2011 pro-democracy protests in Bahrain. He has consistently denied the claims, calling them entirely false.

Ruggie said he took on the challenge because the prize was so great if the desire among countries to host major sporting events could be allied to using them to improve human rights.

“Why would you have wanted to undertake this project? If you can pull this one off, the leverage is extraordinary for advancing human rights and human dignity around the world,” he said. “Nobody has a right to host the World Cup. Fifa has every right to determine the conditions as a self-governing entity.”

Ruggie said that he was not being paid directly by Fifa but that the body had a contractual relationship with Harvard, which will retain full editorial control of the report. He said it was unclear how his proposals would relate to hosting decisions already taken.

“I don’t know enough about Qatar,” he said. “I only know what I read in the paper about what the government has done and whether it’s fast enough. I don’t know how this would play out in a situation where bids have already been accepted.”

Ruggie said that, under UN guiding principle 19, if organisations found themselves unable to exert sufficient leverage on human rights issues, then they should “take into consideration ending the relationship unless that would have even worse human rights consequences”.

Fifa has been accused of using apparently independent academics as a smokescreen to delay progress on meaningful reform. Ruggie said he was alive to the risk but is confident his proposals will be taken seriously.

He will deliver advice to Fifa on revising its statutes and drawing up new bidding guidelines, and also publish an independent report. Fifa has promised to rewrite its guidelines to make them consistent with UN guiding principles.

“The guiding principles are not a static system; it’s not only changing the laws but changing the practices,” Ruggie said. “It’s about know and show.”

Human Rights Watch recently criticised the pace of change in Qatar, saying new labour laws were only a minor improvement on ones that tie employees to their employers. Campaigners fear that while workers building the stadiums will be treated better, there will be little lasting change for the hundreds of thousands of migrant workers constructing the wider infrastructure.

Ruggie said that if human rights compliance was written into bid contracts, there was more likelihood of it leading to wider changes. He added that if Fifa was serious about change, his recommendations should be only the start.