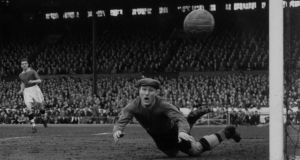 The story of the game itself is remarkable enough to be widely remembered 64 years on. On June 29th, 1950 the USA scored what remains one of the biggest upsets in World Cup history when the beat England 1-0 here in Belo Horizonte.

Less often recalled is the story of the man who scored the goal, Joe Gaetjens, a Haitian student of German descent born in Port-au-Prince on March 9th, 1924 who died back in his homeland 14 years after that famous game having made the terrible mistake of believing that his celebrity would save him from the madness that Francois “Papa Doc” Duvalier was wreaking on the general population.

Gaetjens was a talented striker who had won two Haitian championship titles as a teenager with LA Haitienne and was renowned amongst fans for his trademark diving header.

The game in Haiti didn’t pay well and in the late forties he moved to New York to study accountancy at Columbia University having secured a scholarship from the Haitian government.

While there, he got by playing football for Brookhatten of the American Soccer League which paid well enough but not so well that he didn’t have to occasionally supplement his income by washing dishes at weekends in the restaurant of the club’s owner.

Despite the interest the game commanded amongst many of the country’s ethnic communities, football resided very much on the margins of America’s sporting life and the ASL was a part-time affair that generally attracted crowds of no more than a few thousand to games.

Still it was what the United States selectors had to rely when it came time to pick players for the national team.

It was weak and had a desperately poor competitive record but, in 1950, a single win from four qualifying games was enough to earn a place at the World Cup in Brazil and when the federation started to look around for new recruits to boost the squad Gaetjens, now in his mid twenties, was the league’s top scorer and so an obvious target.

He wasn’t an American citizen but the federation’s rules required only that he sign a declaration of intent to become one later. In the end he was one of three players to qualify on that basis and in his case he never did go on to get the passport, something that would eventually contribute to his demise.

The team that travelled south included the usual array of trades and occupations; a funeral home worker, a truck driver, a pot man (inevitably) and office worker to name a few.

The English full-timers were, with hosts Brazil, joint favourites for the tournament having agreed for the first time to participate and the recent record of the Americans, which included a defeat to a travelling second string side drawn from the English league, suggested that the match was something of a foregone conclusion.

Sure enough, an English side that included Stan Mortensen, Wilf Mannion and Alf Ramsey dominated from beginning to end, hitting the woodwork several times and forcing a string of good saves.

But when Walter Bahr struck a tame enough shot at the other end and Gaetjens suddenly changed its trajectory, turning it past helpless English goalkeeper Bert Williams with one of those headers of his, the footballing world was turned upside down.

Even without Stanley Matthews, who had been rested for the game, a star studded England team should have been able to save itself over the course of the 53 minutes that remained.

Goalkeeper Frank Borghi preserved the Americans’ lead by the skin of his teeth once or twice but he did it and they held out for the most unlikely of victories in front of a crowd that barely reached 15,000 by the end.

There was just one reporter from the US to witness the event and no pictures of the goal as all the photographers had apparently positioned themselves at the end where most of the action was.

The British press reacted with disbelief, literally, with the scoreline widely dismissed as a mistake when it first filtered back to London.

The Daily Express called it the “lowest ever for British sport,” although they might have been hurting just a little after having suggested in print before the game that the fairest thing would be to give the US a three goal start.

Gaetjens, in any case, was carried shoulder high off the pitch along with Borghi and while nothing else went nearly so well for the team on the trip, it was enough to mark the whole thing down as a success.

After the tournament he decided to try his hand as a full time professional in Europe and moved to Paris but a knee injury sustained in one of the his first games there ended any real hope of him becoming a major star.

Having dropped down two divisions then battled on for another year or two he returned home to Haiti in 1954 to a hero’s welcome.

Trading on his popularity, he became a salesman and started a dry cleaning business. Both went well and he married, having three kids. He was comfortable, successful and found time to coach football at various levels but his country was in political trouble and after Duvalier came to power in ‘57 things started to go really downhill.

Gaetjens was fairly apolitical himself although he had family ties to both the regime and the opposition and when the new president started a campaign of murder and repression he certainly would have known that some of those close to him were in danger.

One of many coup attempts had a football aspect to it with connections made through the game used to recruit supporters but it was put down brutally and a resistance movement run out of the Dominican Republic, in which two of his brothers were involved, also struggled to make any real progress against a dictator who is believed to have been responsible for some 30,000 deaths over a 14 year period.

In 1964, Duvalier declared himself president for life and the very next day, having ignored warnings that he should flee with his family in the belief that connections in the police force would save him, Gaetjens was arrested by two members of the notorious Tonton Macoute (a name based on a legendary type of local bogeyman) and the last anyone saw of him was him being driven away in his own car, a pistol pointed at his head.

He was taken to Fort Dimanche prison, where more than 3,000 of Duvalier’s victims are believed to have perished. While there are conflicting accounts of whether he died of disease, contracted amid the appalling conditions, or he was shot, possibly even by Papa Doc himself while on one his murderous sprees.

The family heard, initially through contacts who had tried to secure a deal to buy Gaetjens’ freedom, and much later through an American NGO, that he had not survived and was most likely buried in an unmarked grave in wasteland behind the prison.

e was posthumously inducted into the United States’ football Hall of Fame and is remembered back in Haiti by family members as well as through the work of the recently established Joe Gaetjens Foundation.