Italia 90: A labour of love

Bosses had no choice but to be more flexible, remembers Peter Cassells 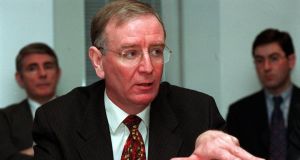 Peter Cassells: “There was actually a point where Dick Spring asked for that Monday to be declared a public holiday but Charlie Haughey basically told him to go to hell.”

“I’m one of the ones with regrets,” says Peter Cassells.

“I regret that I didn’t just sell the fridge and go; or that I wasn’t of the ones that went and promised their families holidays or dishwashers or whatever when they came back.

“They probably added to the way the economy recovered later on.”

Instead, Cassells stayed, and for a couple of weeks a good part of his role with the Congress of Trade Unions came down to helping to ensure other workers at least got to see the games on television.

“Yeah, the big issue was whether people would get the time off to watch the matches. Most of them happened in the evening but the Romania one was on a Monday afternoon and some foolish person in what was then the FUE [Federated Union of Employers] had basically complained that people were being given time off to watch the match when the country couldn’t afford it because of productivity and loss of jobs and all of that.

“There was actually a point where Dick Spring asked for that Monday to be declared a public holiday but Charlie Haughey basically told him to go to hell; said that it was a ‘zany’ proposal, I think that was the word he used.

“We were arguing that the national euphoria out of it if we won would increase productivity enough to make up for it. Eventually the employers came around to the view that they needed to be more flexible and had to either allow for people to get off or to bring in televisions to let people get involved in the occasion which, to be fair, is what a lot of people did; made a party out of it in their own workplaces.”

He mentions the ICTU doing much the same thing.

“Around the square there were a lot of trade unions offices and so we would have met up.”

Euphoria Would it have turned into a long night? “It usually did,” he says, before adding, less than

convincingly. “But we lost no productivity because the euphoria meant we were up and ready to go again the next morning.”

Cassells had been to most of the qualifiers in advance of the tournament and was then torn over whether to fly out for the quarter-final.

“ From my position, I was simply too tied down with work commitments and all that but if I had it all to do again I’d probably have been on the next plane and then just taken it from there.”

Instead, he watched with everyone else as Haughey and some of his ministers descended on Rome.

“Football fans are sceptical enough that I’m not sure politicians trying to hop on the bandwagon is such a wise move and I did always wonder what Ray Burke was doing out on the pitch after the game. The rumour was that he got lost and couldn’t find his way out of the stadium.”