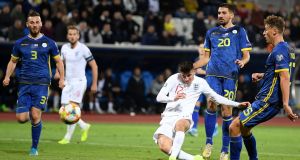 England have cut a swathe through their Euro 2020 qualifying group, advancing to the finals on the back of a run of free-scoring and expressive performances and, once again, they had too much for lowlier ranked opponents here in Pristina.

It was a display of control from Gareth Southgate’s young team, which was marked by Harry Winks’s first-half goal – his first in an England shirt – and glossed by a late surge that showed how ruthless they can be when they find their connections.

Harry Kane scored again. He always does. His poacher’s finish at the far post, following a cross from the recalled Raheem Sterling and a defensive slip from Fidan Aliti, meant that he has scored in each of England’s eight ties. The captain now has 20 goals for club and country this season, one in which he is supposed to be struggling.

Marcus Rashford, on as a substitute, scored the third with a cool first-time finish following another burst and pass from Sterling and there was time for another replacement, Mason Mount, to accept a ball from Kane and beat the goalkeeper, Arijanet Muric. It was the Chelsea player’s first senior international goal.

The final scoreline did not reflect a game that was tight for long spells but the manner in which England moved through the gears towards the end, how they put their opponents to the sword, bodes well for the finals.

It has been a difficult international break for Southgate, as he has dealt with the fall-out from Sterling’s bust-up with Joe Gomez but, after last Thursday’s 7-0 drubbing of Montenegro at Wembley, this was another hugely satisfactory piece of work.

England can rarely have been afforded a more loving welcome than the one they received here – a legacy of the central role that Britain had played in forcing Serbia’s withdrawal of troops from Kosovo in 1999 and helping the nation towards its independence. The home fans held up St George’s crosses when the visiting anthem was played and the tie, which had been eagerly anticipated, stood as a symbol of solidarity, progress and optimism.

England wanted to embrace similar notions on the field and Southgate tried to strike a balance between blooding players who may be reserves next summer and finessing the roles and confidence of his likely starters.

Southgate played Declan Rice and Winks together at the outset for the first time, in the face of a clutch of midfield absentees, and he asked the latter to play on the left of the central trio, slightly further forward than previously, with the idea being that he might break beyond the last man.

The plan came together as Winks scored the breakthrough goal on 32 minutes. It was the first time that England had connected with any slickness and it was too much for the Kosovo defence, which had been identified as a weak point in the build-up.

Kane got things going for England with a lovely piece of link-up work, finding Alex Oxlade-Chamberlain, and the weight and subtlety on the midfielder’s pass, combined with Winks’s burst, carved Kosovo open. Ibrahim Dresevic was so wrongfooted that he simply stopped and the only remaining question concerned whether Winks could finish the one-on-one with Muric.

With a pause and then a shimmy, he outfoxed the goalkeeper and guided the ball low into the near corner.

Kosovo knew that they could not qualify via the group, although they might still through the playoffs, but it certainly did not feel like a dead rubber. The hosts’ determination to impress England saw to that. Bernard Challandes’s team are blessed with attacking instincts and good technique, although the final pass or action was too often loose.

There was a flicker of excitement midway through the first half but Atdhe Nuhiu could not summon sufficient power in a header. Nick Pope, on his full England debut, was untroubled throughout.

The slippery pitch did not help the players’ confidence and there were errors on both sides, with Callum Hudson-Odoi making a series of loose passes before the interval. The winger did catch the eye when he skated from left to right, past a series of challenges, before he shot too close to Muric but overall it was not his night. England also threatened in the 15th minute after Ben Chilwell’s run and cross and a Kane lay-off for Sterling. The winger’s shot drew a save out of Muric.

Southgate’s selection of Trent Alexander-Arnold ahead of Kieran Trippier once again felt significant; the Liverpool player is the clear first-choice at right back while Chilwell can make a similar boast about the left-back spot. Chilwell caught the eye; getting his defensive angles right, showing assurance on the ball and motoring up and down the flank.

Kosovo flickered from a pair of corners at the start of the second half and it was a worry from an England point of view to see the space that Amir Rrahmani managed to find on both occasions. On the second, his far post header was wild.

England pushed for the second goal and they thought that they had it when Chilwell drove low from the left and Muric parried the ball out to Sterling, who pulled back for Kane. The captain’s shot hit the near post.

Alexander-Arnold was guilty of an awful first-time cross when well placed and Sterling was denied by a saving tackle from Aliti after Oxlade-Chamberlain had won the ball and found Kane. Rice needed to provide cover to snuff out Milot Rashica before England, for whom Fikayo Tomori got on to make his debut, would finish with a flourish. – Guardian

1 Gordon D'Arcy: Ireland must go after victory by frightening France into mistakes
2 Henshaw the only change as Andy Farrell names Ireland team for Paris
3 Champions Cup draw: Connacht drawn with Pat Lam’s Bristol and Simon Zebo’s Racing
4 Cian Healy: ‘Realistically I got away with murder when I was younger’
5 Giovagnoli’s appointment at Dundalk ‘a great story’ says Arsenal boss Arteta
Real news has value SUBSCRIBE
Crossword Get access to over 6,000 interactive crosswords