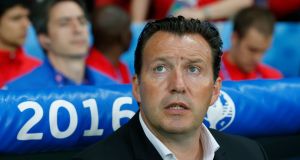 Marc Wilmots has been sacked as Belgium coach after a poor Euro 2016 showing. Photograph: Pascal Rossignol/Reuters/Livepic

“The objectives set for the Euros were not achieved. We need a new momentum,” he told a news conference.

A search was under way for a coach with international experience to take over before a friendly against Spain on September 1 ahead of the World Cup qualifiers.

He thanked Wilmots for his achievements over the past four years and said an understanding had been reached over Wilmots contract, which had a compensation clause if he were sacked.

The former Schalke midfielder, 47, took the Red Devils to the quarter-finals of the last World Cup and top of Fifa’s world ranking chart with a team built around Chelsea’s Eden Hazard and Manchester City pair Vincent Kompany and Kevin De Bruyne.

But a clueless and disjointed 3-1 defeat to Wales in the Euro 2016 quarters left critics calling for Wilmots’s head and Belgian fans wondering what happened to the team that many had hoped would deliver the country’s first major trophy.

Wilmots released a statement through the Belgian FA website.

He said: “Today, we have mutually agreed to turn the page. I would like to thank all of you: supporters, players and staff.

“During the past four years, we have accomplished great things: from 54th to the first place in the FIFA rankings . . . two qualifications as group winners . . . two quarter-finals . . . we have built a quality group, on (a) football and human level . . . enthusiastic supporters for the Belgian Red Devils . . . (and) we have put Belgium on the world map again.

“We can be proud of what we have achieved all together with the players, our supporters and my staff.

“Thank you all for these four wonderful years.”

1 Level 5 golf shutdown: Ireland one of few countries to close courses
2 Dan Martin toasting another stage win at the Vuelta
3 Shock at golf clubs as sport faces shutdown in Level 5
4 Disappointment and frustration par for the courses as golf goes into lockdown
5 Kerry v Donegal brought forward to facilitate marathon journey
Real news has value SUBSCRIBE
Crossword Get access to over 6,000 interactive crosswords