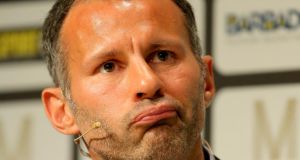 Ryan Giggs: “The history of the club is to play exciting football, to give youngsters a chance and to keep to the traditions of the club”

United have spent £215 million on new players over the past 12 months and offloaded academy graduates Danny Welbeck to Arsenal and Tom Cleverley to Aston Villa on the day Colombia international Radamel Falcao arrived on loan from Monaco.

Butt conceded United had to prioritise results over young talent under Van Gaal following the club’s dramatic fall from champions to seventh in the Premier League under David Moyes.

Giggs, however, insisted young talent would be given a chance under the new United manager and that the club’s identity had not faded.

“Okay, Danny has left, which is disappointing because you never want to see a home-grown player leave, but this is a manager who gave Seedorf his chance, Kluivert, Xavi, Iniesta and Thomas Muller their chances.

“He’s got a track record of giving young players their chance. Tyler Blackett has played every game so far this season. Underneath Rooney and Van Persie we have Januzaj and James Wilson.

“It will always happen that players will leave Manchester United, but we’ve got to make sure that young players come through because United fans demand it. I want to see them come through as well.”

The reserve team manager said: “The Danny Welbeck thing is just something that came at a certain time in the club’s history, and so people are saying they have forgotten about the club’s history – but things happen.

“Danny wasn’t playing often in his preferred position; the club wasn’t in Europe, so doesn’t have as many games.

“Sometimes you have to be fair to the player. Danny wanted to keep his England place. It is not a case of giving up on the academy but getting the club back to winning ways.”

“He never once said to me to fake an injury. He’d just say: ‘You’ve got an England friendly coming up and you’re not going’ and that was it. ” Guardian Service