Relentless Chelsea shake off Stoke thanks to Willian brace 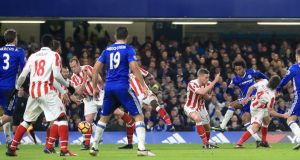 Bruno Martins Indi and Peter Crouch — with his first Premier League goal since May 2015 — struck to cancel out goals by Gary Cahill and Willian.

But Willian struck for a second time moments after Crouch’s equaliser and Diego Costa netted a fourth as Antonio Conte’s Premier League leaders emulated Arsenal’s record of 13 consecutive victories in a solitary campaign.

The Gunners extended that 2002 landmark by a game to 14 the following season and Chelsea can match that streak at rivals Tottenham on Wednesday.

It was the first time Chelsea had conceded more than one goal in a game since the September 24 loss at Arsenal, but the subsequent run has seen the Blues enter 2017 as the title favourites.

Stoke boss Mark Hughes believed his side could end Chelsea’s winning streak, but few gave the Potters a chance, especially given Costa and N’Golo Kante were back from suspensions.

Stoke, on a four-match winless streak, were also seeking a first league win at Chelsea in 42 years.

Martins Indi was one of three Stoke centre-backs as the visitors matched Chelsea’s 3-4-3 formation, while goalkeeper Lee Grant was excellent throughout.

Cesc Fabregas was retained ahead of Nemanja Matic and the Spaniard’s guile was soon in evidence as he crossed for Costa.

The striker brought the ball down on his chest before striking a volley at goal which Grant saved. And the ball bounced back to him off Martins Indi.

A Cahill header from a Fabregas corner was clawed away by Grant, but it was not all Chelsea as Cesar Azpilicueta made a fine defensive intervention to repel Charlie Adam’s low cross.

Adam opted against convention once more. His low ball found Xherdan Shaqiri on an arching run, but the Swiss midfielder blasted high and wide.

Grant saved Stoke twice in quick succession. Costa brought the ball down and evaded Ryan Shawcross only for Grant to leap at his feet. The ball broke for Hazard, who was denied by the diving goalkeeper.

Fabregas’ resulting corner was met by Cahill, who rose highest and headed Chelsea in front.

The Blues had conceded only twice in their winning sequence, to Spurs and Manchester City, when Cahill found his own net.

Stoke knew the task had grown even more difficult, but levelled soon after the restart.

Adam chose a more conventional route with a free-kick long to the back post where Crouch rose above Cahill, finding Martins Indi who tucked in to equalise.

Chelsea responded, stepping up the intensity. Willian fired narrowly wide from the edge of the Stoke penalty area and Costa forced Grant into a sharp save to his right.

Grant was beaten when Victor Moses centred for Hazard, who laid the ball off for Willian to power the ball into the bottom corner.

Chelsea forged on and Hazard crossed just out of Costa’s reach before Stoke levelled again.

Substitute Bojan found Mame Diouf, who crossed for Crouch to tuck in.

Once again Chelsea retaliated, going ahead for a third time when Fabregas fed Willian to emphatically finish at the near post.

Costa fired over from Hazard’s cross before Adam’s poor defensive header from Marcos Alonso’s attacking throw-in merely helped the ball on to Costa.

The striker out-muscled Martins Indi before drilling in his 14th goal of the season in yet another Chelsea win.