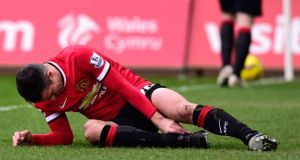 Palace strikers Fraizer Campbell, Yaya Sanogo and Marouane Chamakh will all miss the clash with hamstring injuries while Jonny Williams (groin) and Jerome Thomas (knock) are also out. Captain Mile Jedinak could make his first start under Alan Pardew, having returned from a sore ankle, while James McArthur has recovered from a thigh problem.

Burnley (18) v Swansea (9)
Burnley’s Matt Taylor is closing in on a return after making a slow recovery from Achilles surgery but is not yet ready for the matchday squad. Dean Marney and Kevin Long will both be out until next season after suffering cruciate ligament damage.

Swansea manager Garry Monk has no new injury concerns and his biggest dilemma is whether to revert back to his favoured 4-3-3 formation. That could see Ecuador winger Jefferson Montero recalled with Nathan Dyer, who was omitted from the 18-man matchday squad against Manchester United, returning to the bench.

Manchester United (4) v Sunderland (16) – Live Setanta Sports 1
United striker Robin van Persie is out because of an ankle injury, while midfielder Michael Carrick is back in training following his calf problem but is unlikely to feature. Teenage striker James Wilson has overcome a dead leg he suffered playing for the under-21s.

Sunderland’s Jack Rodwell (groin) and Billy Jones (ankle) are set to miss out despite returning to training this week, with manager Gus Poyet set to save them for Tuesday’s crucial trip to Hull. Italian striker Emanuele Giaccherini is set to miss the rest of the season after undergoing ankle surgery.

Newcastle (11) v Aston Villa (19)
Midfielder Jonas Gutierrez could make his first Newcastle appearance since October 2013 after being included in the squad following his successful battle against testicular cancer. Full back Daryl Janmaat has recovered from a knock but Cheick Tiote is likely to miss the rest of the season after undergoing knee surgery and will join fellow midfielders Siem de Jong (collapsed lung), Remy Cabella (knee) and the suspended Jack Colback, as well as defenders Steven Taylor (Achilles) and Paul Dummett (knee), on the sidelines.

Villa boss Tim Sherwood has a defensive headache, with Ron Vlaar suspended and Kieran Richardson out injured. Alan Hutton and Aly Cissokho are also doubts while Philippe Senderos is unlikely to be fit as he battles a calf problem.

Stoke (10) v Hull (15)
Stoke have Geoff Cameron back from a one-match suspension. Ryan Shawcross (back) and Bojan (knee) remain out, while Jon Walters, Erik Pieters, Marc Wilson and Stephen Ireland should all feature again having returned from injury against Aston Villa.

Mohamed Diame is again absent for Hull. The Senegal midfielder has been out with a knee problem since December 3rd and after another setback last week is still not back in training. He joins fellow long-term absentees James Chester (shoulder), Liam Rosenior (hamstring) and Robert Snodgrass (knee) on the sidelines.

West Brom (14) v Southampton (5)
West Brom will assess top scorer Saido Berahino, who suffered a knock in a tackle with Lee Cattermole in Saturday’s 0-0 draw at Sunderland. James Morrison (hamstring) is also a doubt for Tony Pulis’s side along with Victor Anichebe (groin) but the striker could make the bench.

Sadio Mane could start for Southampton after being benched for last Sunday’s loss to Liverpool for his poor timekeeping. Toby Alderweireld (hamstring) is nearing a return and could come back into contention for next Tuesday’s match with Crystal Palace, but Jay Rodriguez (knee) and Emmanuel Mayuka (groin) remain out.

Liverpool (6) v Man City (2), noon, Live Sky Sports 1
Liverpool playmaker Philippe Coutinho will return to the side having been rested for their Europa League exit against Besiktas. Midfielder

Jordan Henderson was also left at home with an ankle problem and that will need to be assessed. Defender Mamadou Sakho has resumed training this week after a hip injury while full back Glen Johnson could be back after illness.

City have a fully-fit squad with key midfielder Yaya Toure poised to return after missing Tuesday’s Champions League loss to Barcelona through suspension. Striker Wilfried Bony, who has made two substitute appearances in the past week, could make his first start since his move from Swansea.

Arsenal (3) v Everton (12), 2.05pm - Live BT Sport 1
Arsenal midfielder Jack Wilshere is set for a short spell on the sidelines following a minor procedure to remove a stud in his ankle. Midfielders Aaron Ramsey and Mathieu Flamini (both hamstring) are not expected to be available while Mikel Arteta (ankle), Abou Diaby (calf) and Mathieu Debuchy (shoulder) all continue their recoveries.