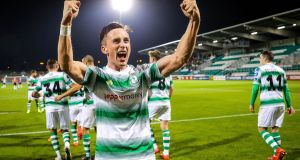 It might still be far too early to talk about this Shamrock Rovers side being the one to challenge for a title but if closing the gap on the top two really is the bottom line for Stephen Bradley and co then they have given themselves a bit of a head start with this, their second straight win.

They’ve already had help, of course, with last year’s top two both stumbling through their games so far. More importantly for a manager who had spoken this week about the need for his side to focus on what they did themselves, Rovers are already five points better off than they were at the same stage this time last year.

Bradley might even be on to something when he suggested they can run their rivals much closer even without the 25 goal striker the club’s supporters spent the close season hoping he would sign.

After an early chance saved well by Peter Cherrie, Aaron Greene was quiet enough up front but the game was effectively won by a Rovers midfield that had a little too much of everything for their opponents including, in Dylan Watts and Aaron McEneff, the game’s two goalscorers.

Over the course of the opening half hour it had been difficult to choose between Ronan Finn, McEneff and Jack Byrne as the most influential figure for the home side. As it turned out all of their collective efforts were eclipsed on the actual 30 minute mark when Watts arrived at the edge of the area to fire Ciaran Harkin’s wayward header low past Cherrie.

The visitors had offered so little by way of an attacking threat up until then that it was hard to shake the sense that might very well be that. But their grip on things slipped somewhat until the 78th minute when Jamie McDonagh blocked Orhan Vojic’s shot with his arm and McEneff stepped up to convert the penalty against his former club.

Eoghan Stokes, to be fair, had already provided a reminder that a single goal lead requires just a single moment of magic to cancel it out when he let fly from a long way out five minutes into the second half and saw the effort skim the top of the crossbar.

The shot signalled the start of their best spell, but they struggled to generate another chance of note and City still looked here to be a work very much in the early stages of progress.

There was just one survivor among Declan Devine’s men from the team that lost 6-1 to Rovers in March of last year and while all the new recruits might gel over the months ahead, there wasn’t too much chemistry happening here - even if McDonagh managed to look pretty combustible late on when shown a straight red for a foul on Finn..

From a Rovers perspective, the win will be pretty much all that matters but they will surely feel that they should have dealt a little more effectively with Derry’s increased effort to test them in the second half.

Byrne, though, demonstrated his ability here to be a major influence on games and with just about everyone around him possessing the ability to pick a pass, there should be enough creativity to generate goals, whoever it is who actually scores them.

There will be some satisfaction that Vojic had a hand in one again but he did not entirely convince with the home side lucky, perhaps, that McDonagh’s pursuit of him yielded the spot kick.

There are promising signs, enough to be getting on with at this stage of the campaign, but then defeat in Monday’s night at Dalymount would quickly blow all the optimism away.