Mourinho’s gamble pays off with first away victory 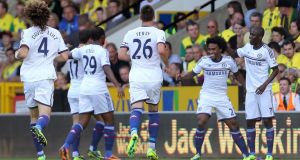 Norwich 1 Chelsea 3: The risk-taker in Jose Mourinho is alive and kicking. This contest had been drifting away from Chelsea when, a quarter of an hour from the end, the Portuguese gambled his team’s shape by flinging on more attacking pace and invention, with such bold ambition rewarded at the last. A first away win in the Premier League since returning to the club sent the Portuguese into the international break with his team upwardly mobile.

Whether Ashley Cole is quite so encouraged as he awaits the results of a scan on his ribs remains to be seen, though the England left-back was due to be withdrawn from the fray regardless of the discomfort he was experiencing as Mourinho sought a change in momentum. To witness Chelsea switch to three centre-halves, with Andre Schurrle and Oscar nominally filling in as wing-backs with little defensive brief, conjured up memories of those sweeping changes the manager was prone to implement when dissatisfied last time round.

The Midas touch appeared to have deserted him on his return, all the shape-shifting at Goodison Park and against Basel this term having merely provoked confusion, but the manager could point to all three of his substitutes contributing heavily to the late goals which deflated a spirited Norwich.

“If they come on and change the game, the manager did very well,” said Mourinho. “If they make it worse, it’s a very bad decision. But we had to risk a bit to try and see if Norwich could cope. A point here would be a bad result for us. We played with three at the back, Schurrle open, Eden central, and lost a bit of balance, and we left the road a bit open for them too. If they’d scored a second goal we’d probably lose.”

Balance tipped
It was from the home side’s own corner five minutes from time that the balance tipped, one of the visitors’ replacements, Hazard, helping to clear the wayward delivery from the edge of the box before charging upfield in search of Oscar’s diagonal delivery. The retreating Alex Tettey inadvertently laid it off with a heavy touch, though the Belgian’s shot should still have been saved by John Ruddy only for the ball to squirm through his grasp and in.

At a time when English goalkeepers are under such scrutiny, it was a weak error. He had no chance seconds later as Samuel Eto’o and Willian, substitutes both, combined for the Brazilian to belt in his first Chelsea goal from distance five minutes into his Premier League bow. That added gloss to the scoreline, even if the manager’s punching of the air in the dugout suggested relief that the pursuit had paid off.

Mourinho had sensed his team’s first-half dominance, which had yielded nothing more than Oscar’s wonderfully clipped opener early on from Demba Ba’s lay-off, might be undermined from the moment the Senegalese forward had flicked Ramires’s centre wide of the post 56 seconds into the second half.

“He has to score the goal and at 2-0 we go home and no heart attack, but when it was missed I had a smell,” Mourinho said. “I could smell them scoring a goal.”

Dispatch Hazard
His reaction was to dispatch Hazard immediately down the touchline to warm up, even if he would wait half an hour to come on.Chelsea should have prospered more when Norwich’s players had been blinded by the sun, forever undone by first-half passes lofted into their penalty area. The profligacy almost proved costly. Norwich grew into the contest, Anthony Pilkington increasingly influential and Petr Cech reacting smartly to turn aside David Luiz’s attempted clearance. When the equaliser came it seemed merited.

Martin Olsson, a menace down the left, flung over a cross which Ricky van Wolfswinkel – above John Terry – nodded back for Pilkington to convert. “That was fair reward for our effort and determination, but for them to get a second goal from our corner where we were set up very well . . .” offered Chris Hughton, his thoughts tailing off with his team slipping into the relegation zone and a trip to the leaders Arsenal up next.

“Their power and pace on the counter-attack got the better of us,” he added.