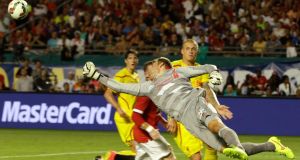 Liverpool goalkeeper Simon Mignolet, center, makes a save against an attempt on the goal by Manchester United in the first half during the final of the Guinness International Champions Cup. Photograph: Photo/Lynne Sladky

This was a friendly only in name yet at the end of an entertaining, sweat soaked 90 minutes, it was Louis van Gaal who emerged victorious, enthused yet left with a few conundrums to solve after securing his first victory over a Premier League rival.

A second-half revival sparked by their captain for the evening, Wayne Rooney, was enough for United to win the International Champions Cup but as Van Gaal and his new charges departed for home, he was left with plenty to ponder.

While Rooney’s display was encouraging along with Ander Herrera and Ashley Young, the performances of Phil Jones and Chris Smalling, both terrorised in the first half by Raheem Sterling, were a cause of real concern with the Premier League kick-off under two weeks away.

Both were ponderous and looked to be lacking in confidence playing in the Dutchman’s preferred 3-5-2 formation, which seemed to favour the wing-backs but not the centre-halves.

“It’s nice to win for the fans here and at home, it’s not our favourite opponent and we have given a lot of pleasure to our fans,” said Van Gaal. “This though in the end means nothing. Swansea City and the start of the Premier League is the most important game for us. The momentum though will help us for sure.”

On Rooney he dropped the clearest of hints that the England striker could well be his captain come the start of the season. “I am always looking for opportunities to give players the captain’s armband. Today Rooney played 90 minutes for the first time,” he added. “Fletcher had already done it two times, then he was the captain, and Cleverley because he also had 90 minutes. I think you have to choose when it is possible for the English style. That is when it is possible.”

For Liverpool’s Brendan Rodgers, it was a case of first half good, second half less so. “We were worth the lead and had some other chances, perhaps another penalty too. We conceded a disappointing goal and then another,” he said. “But overall I am delighted with the tour, we have worked very hard and we leave with plenty of positives.”

Sterling, though, was the stand-out performer in the first 45 minutes, helping win the penalty which allowed Steven Gerrard to score from the penalty spot, but the way United dominated after the break would have left the Rodgers knowing there is plenty of work to do before the real battles commence, even if five changes in the second half certainly didn’t aid his side.

In the long term, a pre-season friendly between these two bitterest of rivals will not mean much. But in many ways, this match signalled the start of the real serious business for both.

With Van Gaal clearly settled on a 3-5-2 formation – he has used it the whole way through the four-game US tour – this was now an excellent opportunity to have it seriously examined.

United were attacking sporadically yet it was the Merseysiders who continued to carve out the better opportunities. Brazilian Philippe Coutinho, who is set to sign a new, long-term deal, forced David de Gea into a superb low save at his left post with 23 minutes gone. It was a fine stop from the Spaniard who would have been correct in questioning just why Coutinho was allowed so much space.

Sterling, old twinkle toes himself, was causing consternation in the creaking United defence every time he was in possession of the ball. Yet more sloppy play saw Jones deliver the worst of passes to the equally unsure Smalling and after Lambert fed Sterling, only referee Mark Geiger will know why he didn’t punish Herrera for a trip on the England winger.

United’s defending continued to be the stuff of nightmares and Lambert really should have doubled Liverpool’s lead moments after the break but his tame shot was easily gathered by De Gea. It was a costly miss because on 54 minutes, Rooney drew United level. Hernández’s cross was deep and accurate and as the ball dropped over a flailing Martin Skrtel, the England forward was on hand to volley home.

And within 120 seconds United were ahead, Mata’s shot from 12 yards flicking off Mamadou Sakho and past Simon Mignolet following decent work from Herrera and Shaw in the build-up. It was some turnaround, and the celebrations by both clearly showed just what it meant – friendly or not.

All of the 50,000 plus crowd here, plus the players, thought Rooney had scored a second on 66 minutes when Young’s floating effort from 45 yards out on the touchline hit the stanchion with a smiling Rooney tapping home. It was initially given before the referee, realising the ball had hit a part of the frame which was out of play, reversed the decision and quickly gave a goal-kick.

For Van Gaal it was the first opportunity to test his squad against the kind of opposition he will soon encounter every week in the Premier League. Certainly his team-sheet nodded firmly towards the fact that this was a key match in preparation for what is a huge season at Old Trafford.

Rooney captained a side including Juan Mata, Ander Herrera and Javier Hernández while Rodgers also sent out a strong side with new arrival Rickie Lambert leading the line in the post-Suárez era at Anfield.

It was United though who started the stronger. On four minutes Hernández, a target for the La Liga champions, Atlético Madrid, really should have opened the scoring when the Mexican striker failed to make proper contact with an excellent centre from the lively Young.

Van Gaal was forced into a quick reshuffle on nine minutes when Antonio Valenica, who surely would have been relishing being reunited with Sterling after the pair’s nasty clash at this stadium in a friendly match between Ecuador and England which saw both red carded, hobbled off to be replaced by Luke Shaw.

And it was Sterling’s adventurous streak on 12 minutes that allowed Liverpool to steal ahead. His pace and directness was too much for Jones to handle, his poor challenge sent the winger sprawling to the turf and was punished by Gerrard’s usual excellence from the spot.

When substitute Jesse Lingard steered home the third though, there was no reprieve for Rodgers.

So Van Gaal already has his hands on a trophy. Only time, and defensive improvements, will tell if there will be more in his grasp come May.