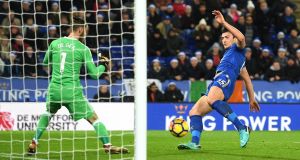 Already reeling from their shock midweek Carabao Cup exit at Bristol City, the need for Jose Mourinho’s men to get back to winning ways was heightened by Pep Guardiola’s team racking up a 17th successive league win earlier in the day.

Juan Mata’s brace looked to have done just that as United responded to Jamie Vardy’s 50th Premier League goal, only for Maguire to strike at the death as 10-man Leicester secured a 2-2 draw.

It was a remarkable end to an entertaining encounter that United started brightly, only for the Foxes to catch them cold on the break as Vardy became the club’s first player to reach a half-century of Premier League goals.

Mata coolly drew United level and put them ahead with a second-half free-kick that the visitors threatened to add to, with Jesse Lingard hitting the post and Marcus Rashford seeing a penalty claim ignored as substitute Daniel Amartey saw red for two bookings in quick succession.

But United would receive a gut punch at the start of a run of four matches in 10 days as Maguire ghosted in to snatch a point.

Chris Smalling was limping as the Foxes levelled proceedings at the end of a night that started with the United defender powering a header just over.

Kasper Schmeichel did well to tip over a deflected Lingard attempt and then denied stand-in captain Paul Pogba, with Romelu Lukaku and Anthony Martial also attempting to find the opener.

Leicester were creating little early on and pinning their hopes on catching United on the break.

It was a simple plan that bore fruit in the 27th minute as Wilfred Ndidi turned defence into attack by aiming a superb – if hopeful – volleyed effort up the field to send Riyad Mahrez scampering.

The Algerian had City’s first attempt on target shortly before and this time refrained from shooting, holding up the ball smartly to shake off Smalling’s attention and playing in the overlapping Vardy to fire home.

Phil Jones was out of position for the England striker’s milestone goal, which was swiftly followed by the King Power Stadium faithful chanting, “Just like Leicester, your city is blue”.

United were struggling to break down City, but slick interplay and an intelligent finish saw them level five minutes before half-time as Mata went for placement rather than power to beat Schmeichel via a slight deflection.

More sloppy defending almost undid that as Maguire met a clipped free-kick unmarked, only for a heavy touch to save United’s blushes.

Victor Lindelof threw himself in front of a Christian Fuchs attempt and Martial wasted a fine chance at the other end, before Mata bent home a free-kick that Schmeichel could have done better with.

Lingard rubbed his face in frustration after failing to wrap things up after rounding the Leicester goalkeeper and hitting the post.

The Foxes’ night would get worse before it got better. Amartey’s clumsy challenge on Rashford shortly after his first yellow card earned him a second booking – just over 16 minutes after coming on.

Rashford was soon at the heart of things again after going down in the box as Schmeichel raced out, but referee Jonathan Moss was having none of it. He also ignored Maguire’s appeals as the clock wound down.

The home support were furious with the officials, but anger turned to elation at the death.

With Smalling limping back into position, Maguire slipped behind him and Ashley Young to strike the leveller.

Dundalk remain pointless after losing fifth group game at Molde 22:48
England’s balcony messages ‘100% in spirit of the game’ – Eoin Morgan 22:30
Former Cavan captain confident his county can compete against Dublin 21:31
Fans return as Arsenal win big against Rapid Vienna 22:31
Connacht use visit of Benetton to give as many players as possible match time 20:51