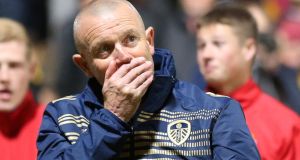 Fifty-six-year-old Hockaday was a shock appointment by the Italian on June 19th and now, 10 weeks later, he has lost his job.

Hockaday - who listed Forest Green as his only managerial experience prior to taking the Leeds job - has lost four of his six games in charge.

His end comes the day after an embarrassing 2-1 defeat to Bradford in the Capital One Cup and four days after Cellino backed out of a decision to sack him in the wake of a 4-1 humbling at Watford.

Cellino said at the time that he had chosen to blame himself and not Hockaday, but the man known in Italy as the ‘manager eater’ has now pulled the trigger for a third time since arriving in Yorkshire in January.

“I’d like to thank David for his efforts over the last two and a half months,” Cellino said. “But the results since the start of the season have meant we needed to act and make this decision. After the defeat at Bradford I realised that my decision to keep David at the club following the defeat at Watford was wrong, and I had to change my mind on the coach’s position. As a club we will now begin our search for a new head coach.”

Hockaday’s assistant, Junior Lewis, has also lost his job and Neil Redfearn will lead the team against Bolton on Saturday.

Hockaday was never welcomed by Leeds fans on account of his limited managerial pedigree and unfavourable chants started against him just four matches in.

At Valley Parade on Wednesday, all four stands chanted “you’re getting sacked in the morning” at a man who has extensive coaching experience from his time with the likes of Southampton and Watford.

It was not quite the morning when the axe fell, but the taunts were prophetic, with Cellino - who went through 36 managers in 20 years with Cagliari - deciding enough was enough.

Hockaday had been scheduled to give a press conference at 10am on Friday but will now be clearing his desk.

It was not an outcome he envisaged - or publicly at least - after the Bradford loss.

“My emotion is one of determination. I’m not a quitter, I’m a fighter,” he said. “I just feel that for myself and my team things aren’t going our way. In the dressing room they’re devastated - and yet they’re all saying ‘we’ll turn this around.’

“We’re looking at Bolton on Saturday and we’ll be in (for training, on Thursday). We’re getting some bad press at the moment, some of it self-inflicted, but anyone looking at those white shirts knows we’ve put a shift in.”

Hockaday took training on Thursday morning and was then told to leave the club.

With Cellino’s stated desire to have a say in the running of the club’s transfer policy, it remains to be seen how many respected coaches will be interested in replacing Hockaday, who was appointed after Cellino was given a tip about him in a hotel by a man he claims not to remember.

Cellino’s long-term friend Gianluca Festa is likely to be mentioned - Cellino had him overseeing Brian McDermott’s reign either side of the two times he sacked him - while Benito Carbone could also return to the club having been dismissed from an unpaid role earlier this month.

Rolando Maran and Ivo Pulga - Italian coaches Cellino knows well - may also be considered, although it is understood academy boss Redfearn has no interest in taking the job himself.