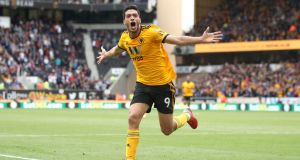 Wolverhampton Wanderers’ impressive adaptation to life in the Premier League continues to gather momentum as Raul Jiménez scored the only goal of a one-sided game to secure their first top-flight home victory since December 2011. Signed on a season-long loan from Benfica, Jiménez registered his second of the season on an afternoon when Burnley were outplayed and outclassed for long periods.

The result lifts Wolves up to ninth, following their win over West Ham prior to the international break, and leaves Burnley in the bottom three, winless in 10 Premier League matches and desperately needing a result to kickstart their season. Sean Dyche’s side have now lost four consecutive league matches and the truth is that the scoreline flattered them here.

Wolves could and should have won far more comfortably. The sight of Léo Bonatini missing a simple chance deep into injury-time, when the substitute shot wide with the goal yawning invitingly in front of him, rather summed up Wolves’ finishing. Nuno Espírito Santo, the Wolves manager, threw his arms around in disgust on the touchline, although it is Dyche, his opposite number, who has all the problems.

It was a strange game, slow to get going and half an hour before there was any meaningful goalmouth action. Then came a flurry of Wolves chances that saw Joe Hart produce a couple of instinctive saves as the Burnley goal started to live a charmed life. Diogo Jota, wriggling away from Phil Bardsley, who had already been booked for a foul on the Wolves winger, created the first opportunity by getting to the byline before cutting the ball back for Jiménez. The Mexican’s first-time shot was repelled by Hart and when the Wolves striker reacted first to the rebound, James Tarkowski was well-positioned to head off the line.

Back came Wolves again. Jonny Castro Otto’s low left-footed shot was hacked clear – the wing-back probably ought to have done better from 12 yards out and with one side of the goal wide open – and Hart then produced another stop to deny Matt Doherty, who was darting in from the other flank to meet Rúben Neves’s inviting inswinging cross. When Willy Boly volleyed inches over just before half-time, it was clear that Burnley were hanging on.

The impression was reinforced within a minute of the restart following a calamitous mistake from Bardsley that should have led to Wolves opening the scoring. Already enduring a difficult afternoon, Bardsley underhit a backpass to Hart and Jota was suddenly in the clear on the left. Jota momentarily forgot to take the ball with him, however, and that led to him squaring for Jiménez rather than trying to shoot for goal. To compound things, Jota’s pass was a little undercooked and invited Bardsley to make a desperate lunge that seemed to do just enough to put off Jiménez , who lifted his left-footed shot over the bar. What a chance.

There were, in other words, plenty of warning signs for Burnley long before Wolves eventually took the lead with a well-worked goal that carved the visitors open. Neves released Helder Costa and it was a clever pass from the winger that picked out the run of Doherty, who did well to hold off Johann Berg Gudmundsson as he angled the ball perfectly into the path of Jiménez . This time Jiménez made no mistake and guided a low right-footed shot from 10 yards in off the far upright.

Doherty really should have added a second 15 minutes from time, in a role reversal as Jiménez turned provider. Carrying the ball forward from inside his own half, the Irishman ran at the heart of the Burnley defence before swapping passes with Jiménez . One-on-one with Hart, Doherty fluffed his lines and dragged wide. Bonatini then had several chances to score after replacing Jiménez , including that gilt-edged opportunity right at the death. As for Burnley, apart from Matej Vydra’s angled volley, which was deflected narrowly wide, they created next to nothing.

1 Sordid murder of hurling brothers still resonates in south Galway
2 Ireland’s autumn of discontent continues with abysmal Georgia showing
3 Ireland 23 Georgia 10: How the Irish players rated
4 Ireland grind their way to grisly win over Georgia
5 No fireworks but Limerick get the job done against Galway
Real news has value SUBSCRIBE