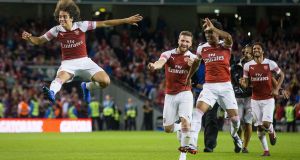 Arsenal players celebrate after after Alex Iwobi scored the winning penalty against Chelsea in the International Champions Cup game at the Aviva Stadium in Dublin. Photograph: Oisín Keniry/Inpho

There may be an odd emptiness about these pre-season games but try telling supporters of clubs who never get to see their favourite side play in the flesh. There must have been close to 40,000 in the Aviva for this and while the bar wasn’t set very high quality-wise, there was enough entertainment to keep what was an enthusiastic audience engaged until the closing moments when Alexandre Lacazette scored from a couple of yards to secure Arsenal a draw.

This being part of a competition of sorts, that meant a penalty shoot-out and the mock celebration of the one by Alex Iwobi that ultimately decided it gave a pretty clear sense of how this all really mattered. It was more show business than serious sport but nobody seemed to be complaining.

The crowd was big enough, one presumes, from the organisers’ point of view to justify the staging of a London derby in Dublin but it was certainly incongruous to hear a stadium full, for the most part, of Irish supporters booing a Spaniard because he plays for the club from one part of the English capital having previously played for the one from another.

If this sort of stuff causes Cesc Fabregas a second thought, he doesn’t show it and perhaps the Arsenal fans who booed him regretted it when, moments later, he sent a perfectly weighted corner in that Antonio Rudiger headed beyond Petr Cech and to the bottom right corner.

🇮🇪 When you wait and wait for Arsenal to come to Ireland...

...and then you get to see your team score an equaliser in the final seconds

Arsenal’s defending for the goal was of the sort that would routinely attract ridicule when Arsene Wenger was in charge and suggested that Unai Emery still has a fair bit to do in that department.

There is, of course, some settling in to be done by the likes of Sokratis Papastathopoulos, newly arrived from Borussia Dortmund, but Hector Bellerin may have inadvertently added somewhat to the allure of Stephan Lichtsteiner – his new rival for the starting slot at right back – with the way he defended against Callum Hudson-Odoi.

On a night when young Matteo Guendouzi also looked lively in the Arsenal midfield, the 17-year-old Londoner lived up to his ‘next big thing’ status, especially through the first half with his pace and movement causing the defender no end of problems and only his finishing let him down a little.

He may have done enough to prompt Maurizio Sarri into a bit of a rethink regarding his suggestion last week that the Londoner, for all his promise, should not expect too much game time this season, although the Italian coach was probably more concerned with Alvaro Morata’s inability to put any of the chances created for him by the teenager away.

Perhaps the striker gets a pass for having returned so quickly to the squad after the birth of twin boys but nothing much about his performance here, which included a first-half penalty that Petr Cech saved all too easily, will have done much to persuade his coach that a new source of goals is not urgently required.

By end the end of the night Sarri had changed every player with Hudson Odoi lasting longest and another teenager, Polish goalkeeper Marcin Bulka, also made a positive impression. By the time these two meet in the Premier League in a couple of weeks, though, the line-ups, like the game, will have an altogether different look to it.

1 Owens’s comments increase tensions ahead of FAI senior council meeting
2 Leo Cullen says rotation will be key as Leinster look to keep on winning
3 Anthony Martial makes sure Lask don’t have the last laugh
4 Paul Stirling’s heart over head decision to play on for Ireland bears fruit
5 Harding Park, named after a lousy US president who never stepped foot on it
Real news has value SUBSCRIBE